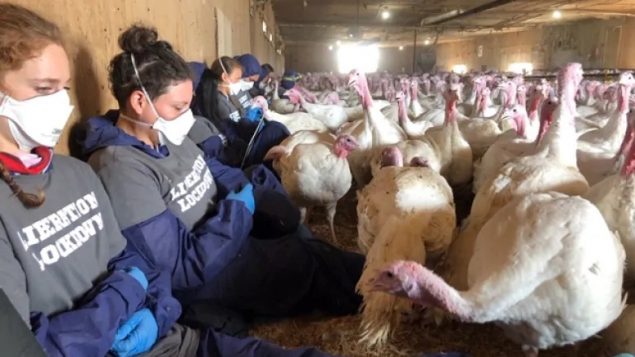 Dozens of animal rights activists are seen at a southern Alberta farm engaged in what they are called a liberation lockdown for turkeys this fall. It is this kind of protest that farmers have been asking governments to legislate against (Cranbrook Friends of Animals Society)

Today Ontario’s Minister of Agriculture, Ernie Hardeman, introduced a bill they’ve been considering for several months. This comes in response to complaints about animal rights groups trespassing on farms.

The Security From Trespass and Protecting Food Safety Act, 2019  was introduced in the Ontario legislature today where it has passed first reading.  It comes as a result of complaints and fears from the farming and processing industries related to disruptions by animal rights groups.

The bill proposes heavier fines for trespassing  on farms or food processing plants from the current maximum of $10,000, to a new level of $15.000 for a first offence, and up to $25,000 for subsequent offences. 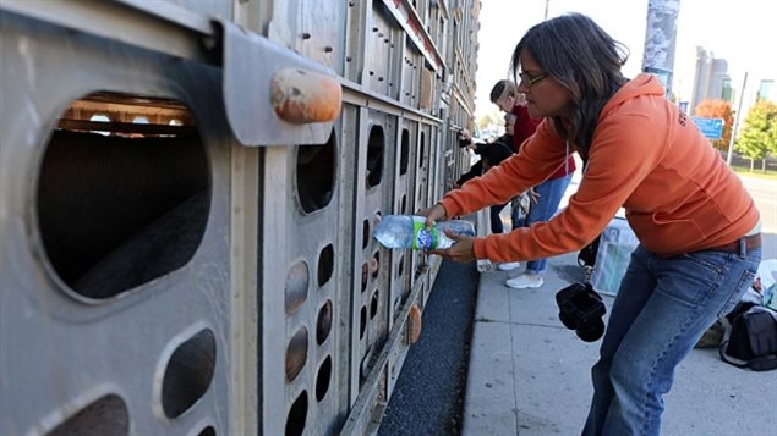 Animal rights activist Anita Krajnc gave water to a pig in a truck in June 2015 in Burlington, Ontario.. She was charged with mischief for interfering with the truck and animals and appeared in a Burlington, Ontario court. The charges were dismissed in 2017. That would likely not be the case under the new bill (Ho-Elli Garlin/Canadian Press)

The government says the bill is to address risks associated with trespass on farms, the purpose being to:

(a)  eliminate or reduce the unique risks that are created when individuals trespass on those properties or interfere with farm animals, including the risk of exposing farm animals to disease and stress as well as the risk of introducing contaminants into the food supply;

(b)  protect farm animals and the food supply chain from the risks described in clause (a);

(c)  protect the safety of farmers, their families and persons working in or on farms, animal processing facilities and prescribed premises as well as the safety of drivers of motor vehicles transporting farm animals; and

(d)  prevent any adverse effects the risks described in clause (a) may have on Ontario’s overall economy.

The Bill came about after a series of discussions late last year with various stakeholders in the agri-food industry. The government said it has also received hundred of letters about trespassing on farms and processing plants and interference with livestock transport trucks. 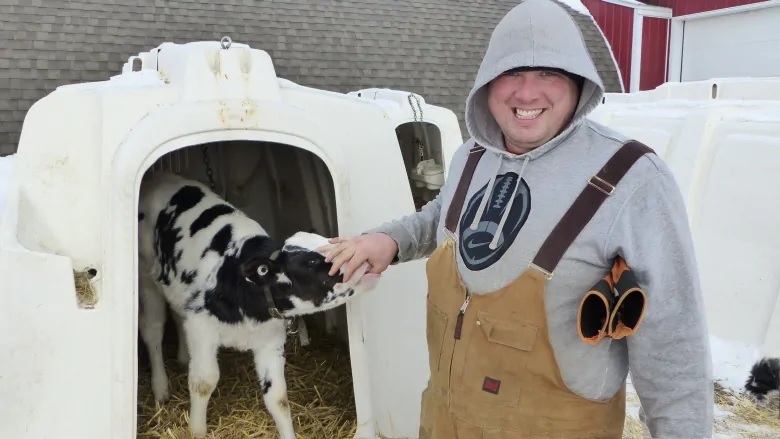 Cam Houle owns and operates a dairy farm near Osler, Sask. He wrote an opinion piece for the CBC saying that farmers “that feed our country are bullied, insulted and threatened” (Chanss Lagaden/CBC)

In a press release, Keith Currie, President of the Ontario Federation of Agriculture said, “We appreciate the support of the Ontario government in taking the concerns of Ontario livestock and poultry farmers seriously and acting swiftly to address them. Farmers implement biosecurity measures to protect against unwanted diseases as well as stress on our farm animals”.

The law would also make it illegal to gain access to a farm under false pretenses theoretically putting undercover filming liable to the increased fines, and charges could be laid up to two years after an incident, increased from the current six month limit.

Animal rights groups reacted by saying the bill appears to be deliberately targeting them and infringes on their rights to protest. The animal rights group PETA released a statement this afternoon in response. “In the 21st century, “ag-gag” bills, such as Ontario Bill 156 and Alberta Bill 27, have become the latest desperate attempt by agriculture-industry bullies to protect themselves from public scrutiny, conceal the crime of animal abuse, and prevent consumers from learning the truth about the way animals in the meat and dairy industries live and die. PETA has fought similar legislation across the United States, and 19 states saw how dangerous “ag-gag” laws were and rejected them. Ontario and Alberta should be ashamed that they have so much to hide, even from their own citizens”.