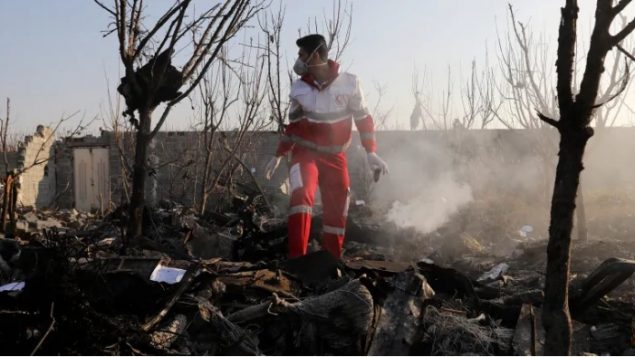 A worker is seen last week searching the scene where Flight PS752 crashed just outside of Tehran, killing all 176 people on board. (Ebrahim Noroozi/Associated Press)

As reports continue to surface about families meeting resistance in Iran as they attempt to reclaim the remains of loved ones lost in last week’s shooting down of Flight PS752, the Ukraine International Airlines jet brought down from the sky just after taking off from Tehran’s international airport, representatives of five countries met today at Canada House in London.

The International Coordination and Response Group for families of victims of PS752 was formed last week to ensure transparency and accountability following the tragedy in which 176 people died, including 138 travelling to Kyiv to make connections to Canada. 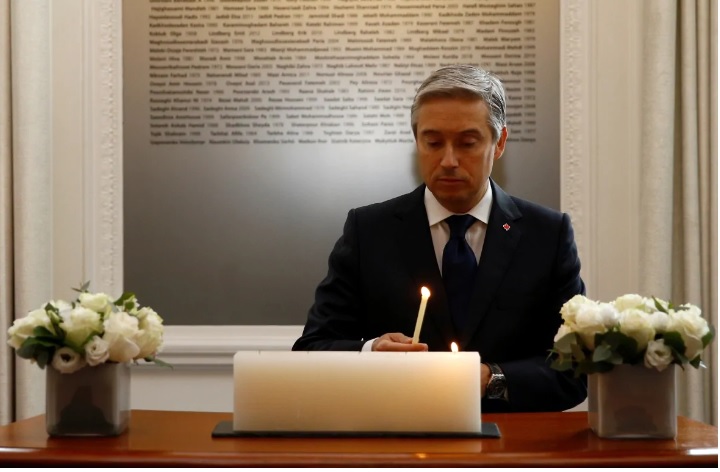 Foreign Affairs Francois-Philippe Champagne lights a candle during a moment of reflection ahead of a meeting today at Canada House in London of the International Coordination and Response Group for the families of the victims of the Ukraine International flight that crashed in Iran last week. (Henry Nicholls/Reuters)

The meeting, which included participants from Ukraine, Sweden, Afghanistan and the U.S, was chaired by Canadian Foreign Minister Francois-Philippe Champagne, who told reporters afterwards that the group is judging Iran’s co-operation day by day.

The countries called for Iran to respect families’ wishes on repatriating the remains of the those who died.

They also want full access for consular officials and investigators, and an independent and credible criminal investigation.

The Canada House meeting followed a day when Canadians held vigils and memorials for the victims of the tragedy at universities across the country.

One of those who spoke at Ottawa’s Carleton University was Ryan Pourjam, whose father, Mansour Pourjam, died  in the crash.

It was also a day when politicians promised to press for compensation from Iran and said they are working on ways for Ottawa to provide more help to victims’ famiilies.

Federal officials have said 57 of those who died in the crash were Canadian, and The Canadian Press has independently confirmed there were at least 89 people with ties to Canada on the flight, many of them students and professors returning after spending their December break visiting relatives in Iran.

The RCMP has been assigned the task of helping to identify Canadians on board the flight, which was shot down by an accidental missile strike just hours after Iran carried out air strikes against two military bases in Iraq where U.S. forces and some Canadians are stationed.

Transport Minister Marc Garneau said Iran is co-operating with the two Canadian investigators on the scene, but he wants Canada to have official standing in the international investigation.

And, Garneau told a press conference in Ottawa, Canada is pushing for compensation for victims’ families.

“One of the requirements from Canada’s point of view, along with justice, is compensation. Compensation to be provided by those who stand guilty of playing a role in this tragic accident. But let’s do the homework first, he said.

“While we can’t bring back their loved ones, we can make sure that they receive compensation to help them navigate this difficult time.”

The federal government has waived and is reimbursing all visa and immigration-related fees for those affected by the tragedy, and Refugees and Citizenship Canada is also expediting requests for visa and other required travel documents.

Earlier in the day, Foreign Minister Champagne tweeted that consular officials are reaching out to banks and insurance companies to help the families and has begun to reach out to airlines to begin discussing their travel to and from Iran.

And Liberal MP Omar Alghabra, who is parliamentary secretary to Prime Minister Justin Trudeau, told reporters Ottawa is exploring options about how to compensate the families of victims and is currently offering them legal assistance.

Alghabra has been charged with working directly with victims’ families.

And last night, vigils and memorials were held at universities across Canada to remember the 176 people who died in the crash.

More than a dozen universities have said they had ties with some of the victims.