Conservative Finance Critic Pierre Poilievre responds to the federal economic and fiscal update on Parliament Hill in Ottawa on Dec. 16. Poilievre, known as a hard-edged, scrappy fighter on the floor of the House of Commons, announced Thursday he was dropping out of the Tory leadership race. (Sean Kilpatrick/Canadian Press)

That road opening up for Peter MacKay in the Conservative Party leadership race is starting to resemble a super highway.

Three times this week, a prominent candidate believed–at least by assorted pundits–to be capable of giving MacKay a run for his money has dropped out.

On Tuesday, it was former Quebec premier Jean Charest,

On Wednesday, it was former Conservative interim leader Rona Ambrose.

Poilievre, whose roots are in Western Canada and whose French is good enough to allow him to make his presence felt in Quebec, was thought by some to be MacKay’s stiffest competition in the race to become Tory leader.

“Without being all in, I cannot be in at all,” he said in a statement on Facebook that came three days before he was to officially launch his campaign.

Heading to a Tory caucus meeting on Friday, Poilievre told reporters that he took some advice from a friend and wrote two letters to his child, one describing why he chose to run and the second laying out why he didn’t.

He says he liked the second letter better, and decided he was tired of constantly sacrificing his personal life for his professional one.

The dropouts leave only Erin O’Toole, another former Harper cabinet member, and MacKay as the only candidates with wide-spread name recognition across the country. 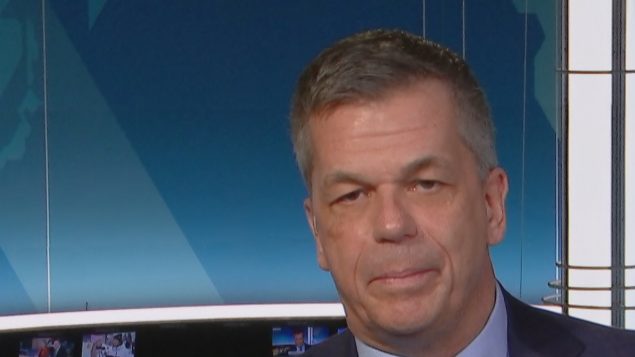 Richard Décarie says he would push to roll back same-sex marriage and abortion rights if he wins Conservative leadership. (CBC)

Décarie might have blown any chance he might have had right out of the gate after he called being gay a “choice” on national television in an interview with CTV’s Evan Soloman on Wednesday, a comment that did not sit well with many, many Tories.

But he’s not apologizing, saying a lot of Tories support his views.

The winner will be announced at a leadership convention in Toronto on June. 27.