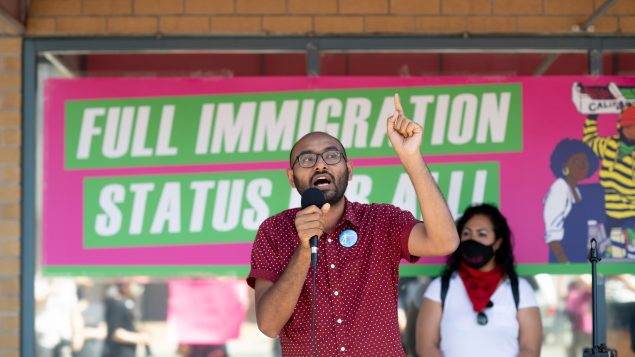 With COVID-19 related global travel restrictions having reduced the flow of immigrants from abroad to a trickle, Canada is increasingly relying on foreign temporary workers already in the country to fill its immigration needs, according to Statistics Canada.

The pandemic has accelerated a trend that began in the early 2000s, according to the findings from three studies released Wednesday by the national statistics agency.

These studies, part of a five-part series conducted in collaboration with Immigration, Refugees and Citizenship Canada (IRCC), provide a broad overview of the increasing importance of temporary foreign workers in the selection and labour market outcomes of new immigrants in Canada.

According to monthly updates provided by IRCC, the number of people who were granted permanent resident status fell 75 per cent in April and May on a year-over-year basis, and the processing of immigration applications has mostly been restricted to temporary foreign workers who are already in Canada.

John Shields, professor in the Department of Politics and Public Administration at Ryerson University in Toronto, said while the trend of selecting immigrants from the pool of temporary foreign workers accelerated under the previous Conservative government, the high numbers presented in the Statistics Canada study were still surprising.

“The other thing to note is that those immigrants who had temporarily worked in Canada also tend to have improved economic outcomes once they’ve become permanent residents,” Shields, who specializes in studying Canadian immigration, told Radio Canada International.

“Their integration into the labour market is taking place in an enhanced way compared to people who are recruited strictly from abroad without that previous Canadian work experience.”

Canadian officials often refer to the process of selecting economic immigrants from among temporary foreign workers and international students as “two-step immigration selection.”

In this process, Canadian employers recruit and evaluate temporary foreign workers, while the government determines how many and which temporary residents are eligible for admission as permanent residents.

This two-step immigration selection system has advantages both for Canada and for the economic migrants, Shields said.

“You know these people are kind of road tested beforehand,” he said.

And the temporary foreign workers get a taste of real life in Canada before committing themselves and their families to uprooting their lives in their home countries and moving to Canada permanently, Shields added.

In 2000, 12 per cent of new economic immigrant principal applicants had worked in Canada before obtaining permanent residency. This share increased to 59 per cent in 2018.

Among temporary foreign workers who obtained their first work permits in 2001, 30 per cent became permanent residents within the following 10 years. That number increased to 39 per cent for those who first arrived in the mid- 2000s.

The increased transition rate is related to the growth of the Provincial Nominee Program and the introduction of the Canadian Experience Class (CEC), the study found.

The Statistics Canada study also found that the percentage of new immigrants who were employed in the first full year after immigration rose from 81 per cent to 87 per cent from 2000 to 2016 among men aged 20 to 54 years and from 61 per cent to 67 per cent among women.

The study attributed this increase in employment incidence to the rising share of new immigrants who had previous Canadian work experience, having worked and lived in the country as temporary foreign workers or international students.

Similarly, average earnings in the first full year after immigration among employed men rose by 23 per cent between the 2000 and 2016 landing cohorts, and by 32 per cent among employed women.

The study attributed over 90 per cent of the increase for men and women to the rising share of new immigrants who worked in Canada before immigration.

In addition, immigrants who worked in Canada before immigration had significant benefits in labour market outcomes over immigrants without Canadian work experience, especially when it came to high earning positions, the study found.

But Shields said the COVID-19 pandemic is also likely to force policy-makers to reevaluate what kind of immigrant workforce the country needs.

“With the pandemic we’re redefining what is an essential skill, what are essential workers,” Shields said. “A lot of people in the past who were considered not highly skilled or essential, are the frontline workers.”

“What we need is a more equitable way of recruiting in terms of that range of skills,” he said. “Obviously, we want those high-skilled people but also a lot of the people who are doing that kind of a frontline work.”