Global Music Month (GMM) starts this weekend and will last during the whole month of September, with virtual shows coming from a consortium of close to 20 music festivals throughout North America.

When festivals wish to bring in international artists, their task is facilitated and the tour costs are reduced if they can book the same artists, especially if the dates and locations of the shows are close enough. This collaborative practise, called “group booking”, has been used over the last decades by over 15 North American world music festivals.

With the COVID crisis, this Consortium of World Music Presenters – which includes members from Albuquerque to Boston, Chicago and Toronto – has teamed up to launch a collective series of online shows. Called the Global Music Month (GMM), the event starts this weekend and will last during the whole month of September – which is when most of the members of the consortium would normally hold their festival.

The first online presentation will kick off this Saturday night, Aug 29, at Chicago’s Square Roots Festival with six local artists including genres as diverse as soul, Native hip hop, and Afro drumming music from Puerto Rico. Founded by the Old Town School of Folk Music, this free annual event aims at supporting the local community, reflecting the whole mindset of GMM members.

Bringing the community together

“Community” is a word that came up quite often in the conversation with David Chávez and Carlos Tortolero, of Chicago’s Department of Cultural Affairs & Special Events (DCASE). The two curators have the best job in town, since they benefit from the most “unique” and “generous” public program in the country. They both select artists for jazz, blues, gospel, house and world music festivals, as well as theatre and dance projects produced by the city’s department.

“The World Music Festival in particular is one of the only programs that exists almost entirely out in the neighbourhoods throughout the city.”Carlos Tortolero, co-curator, Chicago Department of Cultural Affairs & Special Events (DCASE)

Chicago’s multiple cultural events attract some 30,000 people each year. All events are free of charge and the curators say they are focusing on community outreach.

“We are not so much trying to curate the most popular artists, but what we think are the most authentic, the most impactful and the most important for your communities.”David Chávez, music programmer, Chicago Department of Cultural Affairs & Special Events

Chicago’s Virtual World Music Festival will feature four thematic series every weekend in September, starting on Sept. 6 with a tribute to the legendary Indian sitarist Ravi Shankar, for the centennial of his birthday. 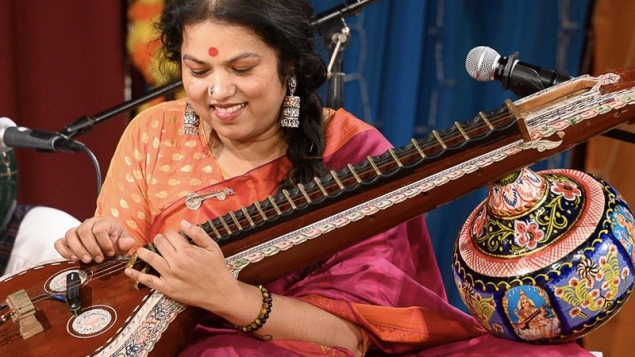 Saraswathi Ranganathan is the first Indian woman and veena artist to win a Chicago Music Award in its 35-year history. She learned veena from her mother. She will play with Dhanajay Kunte (tabla) and Heather Boehm (violin) on Sept.6. (Photo Courtesy of the artist)

Toronto’s Ashkenaz Festival is also part of the consortium. North America’s largest Jewish art and music festival will celebrate its 25th anniversary over the first week of September. Ashkenaz 2020: Live and From the Archive includes a total of 14 music acts: seven live 20-min pop up shows, as well as seven recordings from previous editions of the festival, available on the festival’s YouTube channel and Facebook profile.

The festival kicks off with a live show by Mark and Marichka Marczyk, a very dynamic Ukrainian duo active in several bands in Toronto. A violinist and singer, Marczyk explains that Jewish music has roots in Eastern Europe, which creates “a lot of crossover”.

Apart from being the founder and performing in a couple of bands, Mark Marczyk has also launched URGNT last March. Since the very beginning of the pandemic, this online platform has provided a digital stage for Canadian artists who suddenly saw all their gigs cancelled and had all ties severed with their audience.

Marczyk initially intended to take advantage of empty music venues in Toronto and set out to produce 19 shows for 19 days, but as the lockdown was enforced, the project consolidated inside the homes of artists. Marczyk would give them instructions on the format of images to be shot so he could later achieve homogeneity while editing the footage.

A one-stop shop for Canadian music

URGNT quickly became a one-stop shop for Canadian music as Marczyk partnered with event presenters like the TD Sunfest in London, Ontario, and all the way to Canada’s Northern territories with Whitehorse’s Folk on the Rocks. Since March, over 40 artists have been featured on URGNT’s platform, a majority of them being from visible minorities, Marczyk said.

“We didn’t get to the Maritimes and Quebec because we ran out of money, and also because they were doing their own thing. Quebec and Ontario were the first to come up with a response to COVID in terms of the arts, and everybody else was very far behind, so we turned our attention to these places.“ Mark Marczyk, founder of URGNT

Eric Steiner, the founder of Ashkenaz Festival, who had been following URGNT closely, contacted Marczyk to ask advice on a digital solution for the 25th anniversary of the Jewish festival, and URGNT took on the production and streaming of live videos.

Despite its name, the Ashkenaz Fest also includes Sephardic culture, coming from southern Europe. Among the cross cultural programming will be a live pop up show of Moneka Arabic Jazz. The lead singer, Ahmed Moneka, is an Iraqi actor who settled in Toronto a few years ago as a refugee after he was threatened for acting in a controversial film released at the Toronto International Film Festival (TIFF).

‘Music happens, whether we are watching or not’

Ashkenaz’s live pop up shows will be filmed in several outdoor spaces that are “visually dynamic”, and with “a strong sense of community”, such a backyard porch, beautiful High Park or multicultural Kensington Market, explained Marczyk.

“Eric (Steiner)’s idea is to not have a slick, perfect sound with multiple cameras. We are basically taking one good phone camera that is stabilized, and musicians will get around with a single microphone, playing a set together to themselves, just sharing what they are continuing to do throughout this pandemic.” Mark Marczyk
“It’s not an emulation of a live performance, and more of a : ‘Music happens, whether we are watching or not. Music is always happening’.”

URGNT recently joined GMM and got a slot in the programming to produce a project dear to Marczyk’s heart: an online conference and music market focused on Eastern European culture, developed pre-COVID with the Toronto Ukrainian Festival. Scheduled on Sept. 9 on URGNT website, Slavic Music Meet will offer “brand new, exclusive showcases” from eight artists in Ukraine, Poland, Estonia, Macedonia and the Canadian diaspora, as well as re-runs of URGNT footage shot this spring, with Ontario and Quebec artists such as Socalled, Moskitto Bar or Balaklava Blues. The pan-Slavic event will also feature two panel discussions with music export offices throughout Eastern Europe.

All Ashkenaz and URGNT shows will be posted on URGNT website between Sept.1 – 9.

‘Exotic’ French music to be found in Montreal

Canadians might not see it as ‘exotic’, but French music is certainly seen like it south of the border, Daniel Seligman, recalled founder of POP Montreal. Indeed, Quebec’s bilingual metropolis is used to switching from one Canadian official language to the other, with sentences mixing both in a sort of Quebecois ‘Frenglish’.

This year’s calendar, stretching from Sept. 23 to 27, will be a reflection of this diversity with a hybrid edition combining live and virtual events. Although it is mostly frequented by local crowds in this back-to- school period, POP Montreal has built an international reputation as a community-oriented event supporting underground, indie artists.

On the francophone scene, Antoine Corriveau, dubbed “the dark prophet of French folk-rock”, and Jonathan Personne will be some of the new francophone headlines of this year’s edition.

The Zambian-Canadian, transgenre singer and musician Backxwash is a perfect example of an artist that doesn’t fancy being pigeonholed in any music genre, or any sexual genre either, for that matter. Their Sept. 26 show on the rooftop of the Rialto Theatre is already sold out.

“Right now, she is the artist coming out of Montreal that generates the most buzz. She’s getting great reviews, she’s self-produced, self-managed, and does really cool stuff.”  Daniel Seligman, POP Montreal
“She’s played the last two years at POP Montreal, and I have a feeling she’ll win the Polaris Prize this year.”

All POP Montreal 2020 events will be available on its Facebook page, with surprise pop-up shows, film screenings, art exhibitions, symposium panel discussions, and even a virtual art/artisan sale for its traditional flea market Puces POP.