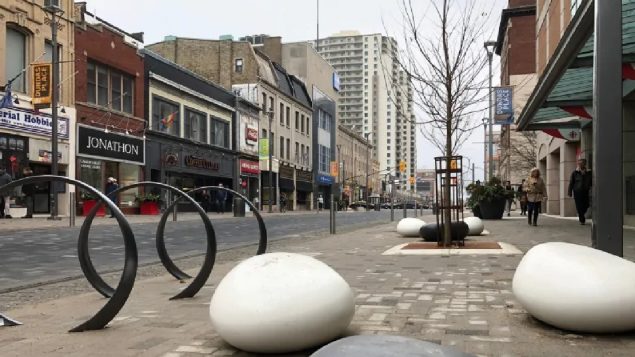 London. Ontario: A typical scene in downtown shopping districts across Canada, when non-essential businesses are ordered close to limit spread of COVID-19.: With economies hurting, new cases seeming to rise even with vaccines coming, Canadians still seem to favour lockdowns to limit spread of the virus (Travis Doynny-CBC)

With COVID-19 case numbers rising across Canada, and even as vaccines were about to become available, a new survey shows Canadians largely in favour of lockdowns to slow the spread of the virus.

This comes also as small many small businesses have closed permanently due to financial loss, and others say they’re on the edge. This is both from financial loss due to certain emergency closure mandates and from a general public fear of crowds and exposure making them reluctant to visit businesses and services.

One of the questions in the latest Leger360 and Association for Canadian Studies survey released today showed a clear majority said they would be doing less in-person shopping this normally busy shopping season.

As for lockdowns and mandated closing of all ‘non-essential’ stores and services, there was clear support for such measures more than twice as much as opposition to such measures.

American support for such lockdowns was much lower than Canadian support at only 49 per cent.

With the vaccines about to be made available when the survey was taken, most respondents thought that the various protective measures instituted during the pandemic would remain even after widespread vaccination such as wearing of face masks, social distancing etc.

While a majority of both Canadians and Americans say they’ll get vaccinated either right away or when other vaccines become available, the percentage was much higher in Canada (75%) compared to the U.S. (53%).  Far more Americans (23%) than Canadians (14%) said they were unsure at this point.

Vaccines have begun to be distributed this week in Canada