The new stamp features an image of an early insulin vial with an excerpt of Frederick Banting’s memoir. (Canada Post)

Today marks the 100th anniversary of the discovery of insulin at the University of Toronto, and Canada’s postal service has issued a new stamp to commemorate it. Before the discovery by Canadian researchers, a diagnosis of Type 1 diabetes was considered a death sentence. The only treatment was an extremely restricted diet that only extended a person’s life briefly.

Researchers Frederick Banting and Charles Best were successful in using a pancreatic extract to reduce blood sugar levels in a dog. With the help of biochemist James Collip and under the oversight of John Macleod, they refined the extract before successfully testing it on humans in 1922. The product which became known as insulin was then mass produced and by the end of the following year had become widely available. Today, millions of people continue to be treated with insulin. 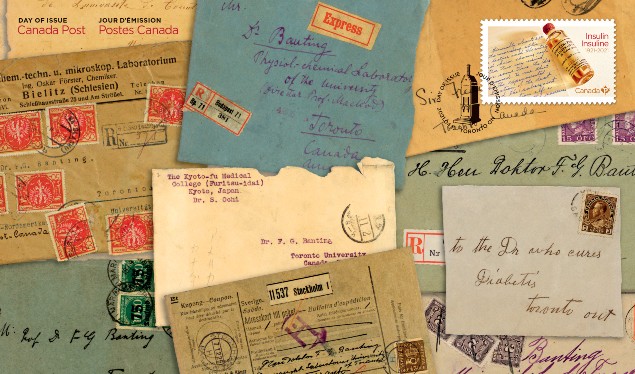 Letters to Frederick Banting came from people around the world thanking him for his insulin discovery and requesting treatment. (The Banting Collection, Thomas Fisher Rare Book Library, University of Toronto)

Banting and Macleod were jointly awarded the Nobel Prize for the discovery and chose to share the prize money with Best and Collip.

The new stamp was unveiled at an event that took place at the Banting House National Historic Site in London, Ontario in the very room where Banting first got the idea of this possible treatment for diabetes. The stamp features a historic vial of insulin, courtesy of Sanofi Pasteur Canada (Connaught Campus) Archives. On the side are Banting’s notes courtesy of The Banting Collection, Thomas Fisher Rare Book Library, University of Toronto.

To this day, scientists at the University of Toronto continue to research progressive treatments for Type 1 and Type 2 diabetes.