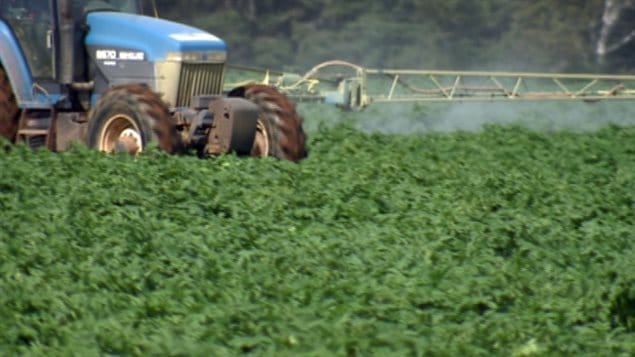 The Federal Court in a decision on Friday says the federal government should now review hundreds of pesticide and herbicide products used in Canada which contain chemicals banned in Europel
Photo Credit: CBC

It’s been a three-year legal battle but environmental groups in Canada are claiming a victory.

In 2013, the groups Equiterre and The David Suzuki Foundation launched a suit saying the federal government had an obligation to review 350 pesticides and herbicides allowed in Canada but which contain 23 active ingredients  banned in the European Union .

The Court agreed with the environmentalist argument that Canada’s  Pest Management Regulatory Agency (PMRA) and the health minister had violated the Pest Control Products Act by failing to conduct special reviews of pesticides and herbicides that had been banned by member countries of the Organisation for Economic Co-operation and Development (OECD) for environmental or health reasons.

In a statement on their website, Equiterre executive director  Sidney Ribaux said, “We are pleased that the Court upheld the federal government’s legal responsibility to review pesticides that have been shown to harm human health and the environment. It’s time to give Canadians the same protections found in Europe.”

One of the chemicals which will be reviewed is the herbicide atrazine which has been banned in Europe since 2004 but which is commonly used in Canada on crops like corn. It is often detected in surface and groundwater and is linked to reduced fertility in humans.

Calling the Federal Court ruling a “wake-up call for the Canadian government”  David Suzuki Foundation director-general Jay Ritchlin said, “Canada needs to get serious about banning the hundreds of pesticides that have been shown to be harmful yet continue to be used in our homes, yards, fields and forests.

Meanwhile  Syngenta – the huge Swiss chemical and bio-tech multinational which makes Atrazine – has been taken over in a huge merger deal for its seeds and  pesticide group by China’s state-owned company ChemChina. The February deal was worth an estimated  $43 billion.  That deal is being scrutinized by a U.S. government panel.

A couple of months earlier in December, two other industry giants, DuPont and Dow Chemical agreed to an all-stock merger, which will lead to the eventual creation of three new separate businesses.

Just last week news came out that Monsanto is being hunted by German drug and chemical giant Bayer in the hope of creating the world’s biggest agricultural supplier.

Farmers are worried about this trend as it means a number of patents and seeds will be controlled by even fewer industries, resulting in even less “competition”. The National Farmers Union in the U.S. has come out against the Dow-Dupont deal, and will likely oppose the potential Monsanto-Bayer deal as well.

Together the big six in the agri-business sector have swallowed up over 200 smaller companies since the mid-1990’s as the industry becomes more and more concentrated.