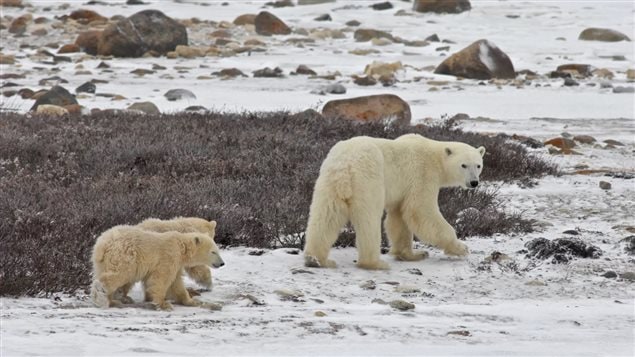 Hudson shore near Churchill, Nov 2015: Cubs are born in dens in the early spring. They will stay with their mother for about 2 years as she teaches them how to hunt seals. To do that they must have sea-ice and as the ice free season lengthens more bears will die of slow starvation.
Photo Credit: A Derocher- U Alberta

Polar bears need sea ice to hunt and mate. With climate change, the ice season is becoming shorter, meaning bears are spending longer periods on land. Some have been trying to adapt to the increasing delays between freeze-up by seeking alternative food sources on land, such as raiding bird colonies for eggs, perhaps even birds, as well as eating berries and even kelp.

However, a new study seems to indicate that such land-based food is having almost no effect on the animals rapid weight-loss while on land. In fact polar bears scavenging for food on land are losing weight just as fast as bears that have no food at all.

University of Alberta biological sciences professor, Andrew Derocher (PhD) is a well-known polar bear expert and co-author of the study.

In the summer months, the polar bears around Hudson Bay are forced onto land and into a forced “fasting” mode.  With climate change, the ‘no-ice’ periods and ‘no-food’ periods are getting longer.

In such intervals bears have long resorted to eating berries, raiding bird colonies, for birds, eggs, even eating kelp, and of course the Hudson shore communities garbage dumps. Some people have thought the bears will adapt and find land-based foods that will help them survive over the increasingly long summer months,

As it turns out, this food in no way can replace the mineral rich and fatty seal meat they must have in order to survive.

The study, entitled ‘Mass Loss Rates of Fasting Polar Bears’ was published in the journal Physiological and Biochemical Zoology, and was undertaken by the University of Alberta in collaboration with the federal and Manitoba provincial government biologists and field workers. it was conducted in and around Churchill, Manitoba.

Every autumn the bears migrate into the area waiting for freeze up so they can get back out on the ice and finally hunt and eat.

This also means that some bears come into town and pose a threat.  Wildlife officials have created a “bear jail” where these nuisance bears are kept for anywhere from a few days to months. They are not fed during that time.

What they found was there was virtually no difference and that bears were losing about 1kg of body weight per day in both cases.

What the research indicates is that even with this effort to find other foods on land, it will not save the bears from starving to death as climate change lengthens the ice-free season.

Derocher says a healthy male can go about 180 days without eating, but sub-adults, and females will start dying of starvation before then.   – At 180 days of fasting, male polar bears would have 18% or more mortality while subadults could see mortality rates of 56% or more.  As the ice-free season lengthens it is putting more and more stress on the population, which has already declined in the Hudson Bay region by about 30 percent since the 1980’s.

Professor Derocher says the study shows that the hope the bears will survive by adapting and finding food sources on land is unrealistic.

He adds, that in a few decades as mortality rises through starvation, they will likely be no longer be polar bears in Hudson Bay.