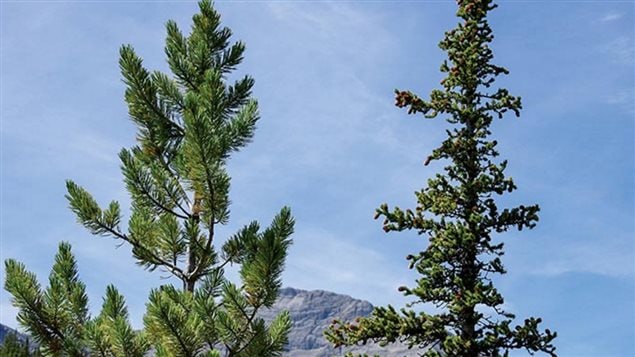 A new study shows the different species, lodgepole pine (left) and interior spruce (right) share a large number of genes that deal with climate adaptation. This means that nature has evolved limited solutions for tree, and that their ability to adapt to future climate chante is also limited.

Can trees adapt to climate change? Perhaps not easily

Some suprising new research shows trees in the same environment have developed shared genes, though they are different species.

What researchers have long thought is that genetic solutions to deal with climate change would be complex, involving genetic differences and genetic variations.

This would mean that evolution had found a variety of solutions for varieties of trees to adapt to differing climate, and that wide ranging species had variations as they evolved to cope with variations of climate in  local conditions.

The researchers discovered however, that it seemed not to be the case. This means that trees may be limited in their ability to adapt to future climate change

They found for example that two different species. lodgepole pine, and interior spruce shared much of the genetic code that deals with adaptation to climate.

Although they were two distinct species, it was discovered that the trees shared the same set of 47 genes dealing with adapting to warmer or colder conditions.

Andreas Hamann, a professor of forest genetics and global change biology in the Department of Renewable Resources

“The lack of different genetic solutions in species that have independently gone through many ice age cycles also implies that trees may be fundamentally limited to evolve new ways to cope with future climate change,” said Hamann.

Hamann is co-author of the study published in the journal Science. called , Convergent local adaptation to climate in distantly related conifers” (abstract HERE)

The genetic study of two of western Canada’ most economically important forestry species is part of  Genome Canada’s “Large-Scale Applied Research Project”. The findings will be used to determine which seeds would be used in reforestation projects in new environments and in light of climate change.

“If a limited set of variable genes is responsible for climate adaptation, then we can quickly and relatively inexpensively screen natural populations for relevant genetic differences, and match them to the right planting environments in reforestation programs,” said Hamann.

Sally Aitken, professor of Forest and Conservation Sciences at UBC quoted in the CBC said,

“Climate’s complicated, it’s not just temperature or just precipitation. So this genetic approach helps us to identify the most important factors of climate that the trees are adapted to so that we can manage around those aspects of climate”.

She added that understanding the range of variation in adaptation potential of species will help in understanding of how well unmanaged forests will adapt to new conditions.