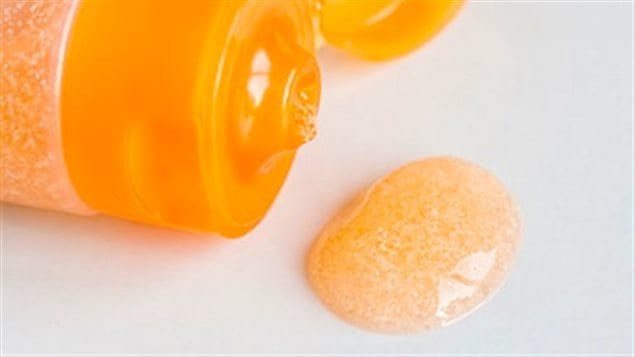 This body wash contains microbeads, which have replaced more natural exfoliants such as oatmeal and crushed nut shells. The microscopic beads are also found in some toothpastes.
Photo Credit: ENVIRONMENTAL DEFENCE/NDP

A notice in the official Canada Gazette of November 5, 2016 indicated a ban on plastic microbeads would come into effect starting on January 1, 2018. The Canada Gazette is the official newspaper of record of the federal government which publishes all acts of Parliament, treaties, proclamations etc.

The tiny plastic beads, of 5mm or less, are found in a variety of toiletries, cosmetics, and toothpastes where they act as abrasives. They began to appear in such products in the 1990’s as alternatives to natural abrasives such as crushed walnut shells, oatmeal, and sea salt.

In recent years, scientists have noted the tiny beads and other microplastics are too small to be filtered out by water treatment plants and have ended up accumulating in the environment worldwide.

They also have been shown to absorb and accumulate toxic chemicals and are also eaten by a variety of aquatic and marine life which mistake them as food.

In June the Canadian government declared them to be toxic substances under the Canada Environmental Protection Act.