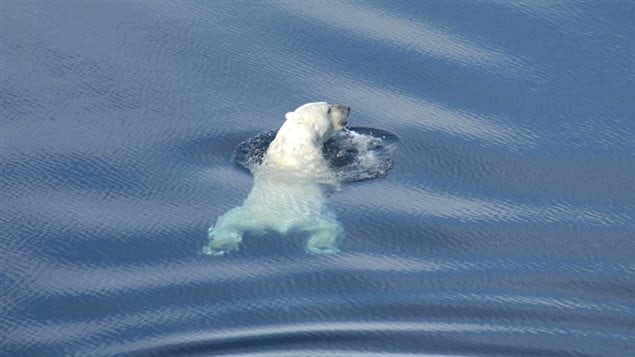 Polar bear swimming in the Beaufort Sea, near Tuktoyaktuk, NWT, Canada April 27, 2009. It’s April but the sea here is ice-free. The bears can swim for long distances, but prefer not to as it uses up vital energy resources. They can only hunt and mate on the sea ice, without it, their survival is threatened
Photo Credit: A.E.Derocher - Univ.Alberta

All populations could decline by 30 percent by 2050

A just released report has cast even more concern about the future of the polar bear survival as a species.

The international study involved research scientists from the US, Canada, and Norway, was published this month in the Royal Society science journal Biology Letters and is entitled Conservation status of polar bears (Ursus maritimus) in relation to projected sea-ice declines”.(full study HERE)

Noting that sea-ice is critical to the bears survival, the study analyzed sea ice data from 1979-2014. They then ran models based on three scenarios over three generations of bears and found that polar bear population could decline by 30 to 80 percent by mid century.

Another recent study by the University of Washington  published in the science journal The Cryosphere came to similar conclusions.

It said that the polar bears “ dependence on sea-ice means that climate warming poses the single most important threat to their persistence”.

The studies found that sea ice is retreating 3 to 9 days earlier and forming later by 3 to 9 days over every ten years and in every area for the 19 bear populations across the circumpolar region and Hudson Bay.  That meant a total of almost two months less of sea ice over the study period.  By mid-century that will mean an additional seven or so ice-free weeks for the bears.

The bears not only need the ice to feed, but also to mate and raise young.

Another study last year of the polar bear population in the Beaufort Sea showed that loss of sea-ice in 2005-2006 resulted in a sudden decline in that population of about 40%. That study was published in the science journal Ecological  Applications. (abstract and links HERE)

The total population of polar bears is currently estimated at around 25,000.