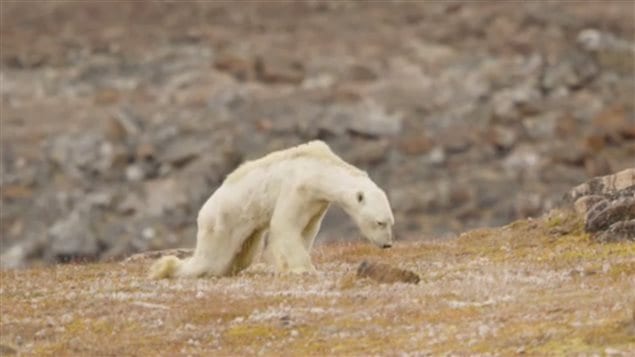 An emaciated polar bear starving because of a lack of sea ice to hunt due to warming in the Arctic, filmed in its final moments on Baffin Island in late summer this year.
Photo Credit: Phil Nicklen

It is an extremely painful and tragic video to watch. Canadian biologist and wildlife photographer Paul Niklen and filmmakers from the conservation group Sea Legacy went to Baffin Island in Canada’s northern territory of Nunavut in late summer of this year.

What they saw and filmed brought heartbreak and tears. While there they filmed a starving polar bear in its final moments.

Unable to intervene, they filmed the desperate bear as a way to show the effects of global warming and climate change.

The Arctic is warming faster than other areas of the Earth, and that means less sea ice which is critical for polar bear survival. They need the ice to hunt seal, their primary source of food. They are not well adapted to exist on land, but without ice, they’re spending longer and longer on land, and going hungry longer.

A recent report in the journal “Bio Science” looked at dozens of blogs on polar bears, half were scientific, and half were so-called denier blogs. It said the denier blogs relied on innuendo, name-calling and quoting other denier blogs and sites, particularly relying on one Canadian zoologist who writes a polar bear website. Her credibility was questioned by the science report saying she never conducted any original research nor published her papers in peer-reviewed journals.

As to the bear on Baffin Island, Niklen said it probably died within hours of being filmed.


My entire @Sea_Legacy team was pushing through their tears and emotions while documenting this dying polar bear. It’s a soul-crushing scene that still haunts me, but I know we need to share both the beautiful and the heartbreaking if we are going to break down the walls of apathy. This is what starvation looks like. The muscles atrophy. No energy. It’s a slow, painful death. When scientists say polar bears will be extinct in the next 100 years, I think of the global population of 25,000 bears dying in this manner. There is no band aid solution. There was no saving this individual bear. People think that we can put platforms in the ocean or we can feed the odd starving bear. The simple truth is this—if the Earth continues to warm, we will lose bears and entire polar ecosystems.

However, while the bear is claimed to be a victim of climate change, others are not so sure.

Local Inuit say that they have seen other bears in  the past in similar sad state adding it could be due to having eaten something that had a deadly bacteria, or an injury of some kind or infected wound that would make the bear unable to hunt properly.  Noted Arctic and polar bear scientist Andrew Derocher in an email to Post Media also speculated that there may be other causes for the bear’s decline, while yet another expert speculated that it might be a case of aggressive bone cancer.

However, while they suggest possible causes in this particular case, the scientists do not dispute that global warming and ice loss is and will affect the bears negatively.

While some of the populations are maintaining their numbers, a few have already begun showing declines.

Many experts contend that as the Arctic continues to warm, most of the populations will be threatened, and numbers will shrink.