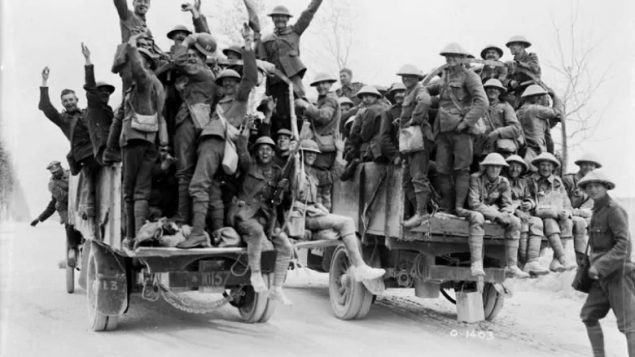 The First World War had been going badly for the Allies stuck in this deadly conflict of attrition amid appalling conditions.

A new and desperate plan was formed- take the heights from the Germans at Vimy.

The early morning of April 9, 1917 had barely dawned, to more of the week-long continuous sporadic shelling with the freezing night not yet given way to a barely light grey cloudy, cold and miserable morning. Suddenly the shelling stopped to a eerie silence when moments later a terrible, earth trembling roar began as hundreds of Canadian and British artillery pieces opened up on German targets. Thousands of shells screamed overhead toward German lines around Vimy and on the ridge.

The Germans had successfully fought off previous Allied attacks costing an obscene toll in the tens of thousands of British and French soldiers and had reinforced their positions on the hill each time. 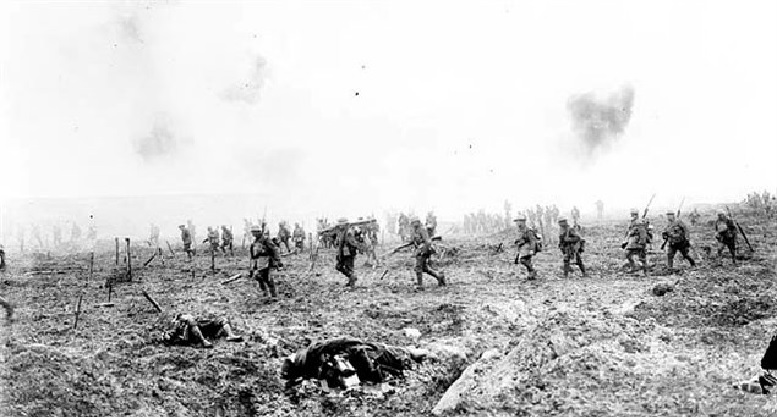 Canadians advance across a blasted landscape behind the creeping barrage at a pace known as the “Vimy glide” while German shrapnel shells burst above them (PA-001020 Capt H.E. Knobel)

In the scattered snow and sleet of that April 9 morning at 05;30, as shells began bursting only a short distance from the Canadian lines and moving outward toward the Germans, the officers blew their whistles and thousands of Canadians went over the top from their trenches and began walking toward German lines.

In bitter fighting through lines of barbed wire, across shell hole craters, and taking trench, bunker, and machine gun nests, the Canadians advanced. They could neither fall too far behind the shells, nor go too quickly and  get hit by their own shells as each lift advanced. German obstacles such as machine gun nests had to be taken quickly to prevent falling behind.

But the meticulous Canadian planning, preparation and practice paid off.

The Canadians were taking the strategic high ground where others had failed. By the 12th, the Canadians had taken all of the ridge and pushed the Germans back across the plain.

It was a huge morale boost to the Allies for whom the war had not been going well to that point and one might say, almost losing the war. Until Vimy, Canadian forces had been scattered among British divisions and Vimy was the first time they had been brought together as a single unified Canadian force under Corps Commander, Sir Julian Byng. However Commander of one of the Canadian Divisions, Canadian General Arthur Currie, recognized for his planning skill, had been given the task of planning the successful Corps attack.

From there to Hill 70, to Canal du Nord, Passchendaele, Amiens and more, the Canadians earned the reputation as the best Allied fighting force of the war.