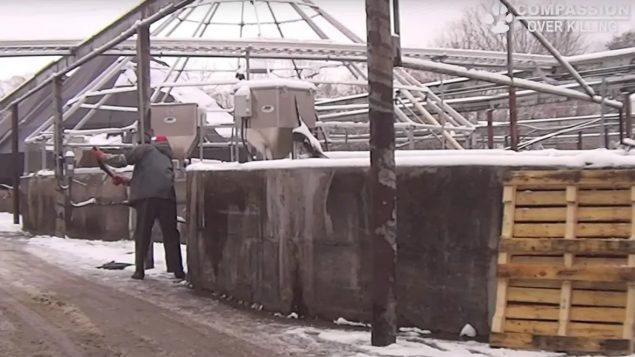 An unidentified worker hits a live fish against a tank in this still from a hidden-camera video recorded at a Maine hatchery owned by Canadian seafood giant Cooke Aquaculture and posted to YouTube by the animal rights group Compassion Over Killing. The State of Maine said Wednesday that after an animal cruelty investigation, it is no longer pursuing the matter. (Compassion Over Killing)

The State of Maine will not pursue sanctions against New Brunswick-based Cooke Aquaculture following an animal cruelty investigation.

The investigation was launched after a video was released in October by Compassion over Killing, a Washington, D.C.-based animal rights organization.

It showed workers at the Cooke Atlantic salmon hatchery in Bingham, Maine smashing salmon against posts, stomping on them and then discarding them.

The video, which was part of 17 hours of footage turned over to the State of Maine, also shows what Compassion over Killing said were deformed and diseased salmon at the hatchery.

On Wednesday, the Maine Department of Agriculture’s animal welfare division said Cooke, a family-owned company with over 9,000 employees worldwide, had properly addressed the practices shown in the video.

“Cooke Aquaculture did take responsibility for what happened and has taken appropriate action to improve training and operations,” the director of Maine’s animal welfare program, Liam Hughes, wrote in a statement.

“At this point, except for another follow-up during the winter, I will be closing the complaint.”

After seeing the video following its release, Cooke CEO Glenn Cooke said he was “disappointed and deeply saddened by what I saw today,” calling the workers’ behaviour “unacceptable.”

The company says it took action in September when it was first informed of the complaint by State of Maine authorities.

“We took immediate action in September and retrained all Bingham, Maine hatchery employees within 48 hours of the company being made aware of the complaint,” company spokesman Joel Richardson said in an email to CBC News’ Paul Withers.

Cooke is expanding rapidly and is playing a big part in the burgeoning Canadian aquaculture industry.

Earlier this year, it teamed up with a New Brunswick First Nation in a partnership that will export Down East trout to customers around the world.

But it also faces criticism from some quarters about the health and safety of salmon farms--both for the fish themselves and for consumers.