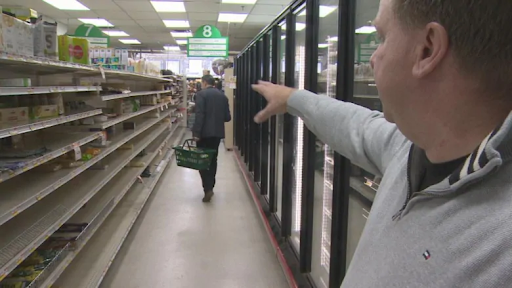 Panic buying has led to empty shelves in many supermarkets and the empty shelves only fuel further fears and panic buying, but grocers say there’s no need for hoarding as there is no shortage of food and they are attempting to restock shelves and supplies quickly ( Jesse Johnston/CBC News)

Grocers attempt to calm food supply worries, but difficulties ahead

As fears about the uncertainties surrounding the COVID-19 virus increase, it has led to many cases of panic buying. While there has been some surprise about a rush to hoard toilet paper, it has also spread to panic buying of food goods.

Grocers this week have been attempting to reassure citizens that the food supply is strong, Galen Weston, the CEO of Canada’s largest grocery chain wrote this week, “We are not running out of food or essential supplies”. In the message on a company website he also emphasized, “We have the food, drugs, and essential products you need and that supply will continue even as Canada restricts its borders”. He also added that federal and provincial governments agree that supermarkets and pharmacies are essential services and that the company will do everything possible to keep their grocery and pharmacy stores open and operating as normally as possible..

Other major retailers such as Metro, with 950 grocery stores and 650 drug stores, indicated that stores can put purchase limits on high demand items to prevent panic buying and hoarding. The big box chain Costco which sells everything from clothing to electronics, and which has a large supermarket component also indicated it would put purchase limits on certain items.

Loblaws and another large supermarket chain, Sobeys, both indicate they will institute special shopping hours restricted to seniors only in order to limit their contact with others as seniors are generally more vulnerable to the virus.

As a great percentage of foodstuffs are shipped, usually by truck, across the U.S.-Canada border, Prime Minister Trudeau in conjunction with U.S President Trump, says cross-border travel restrictions will not affect such shipments.

However, while in the immediate and short term it seems food supplies generally will not be overly affected, there will be problems for growers in Canada in the coming months if travel bans to Canada for non-Canadians remains in place for any length of time. 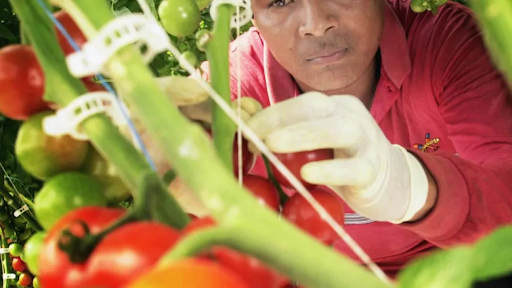 The Canadian government has announced border restrictions to limit travel into Canada only to Canadian citizens, permanent residents, and Americans in an effort to limit spread of the corona virus. The entry restrictions have food producers wondering about the approximately 50,000 migrant workers Canadian farms depend on annually. (Jason Kryk/The Canadian Press)

Most of Canada’s fruit, vegetable growers, both farms and greenhouses, as well as livestock farmers, depend on large measure on temporary seasonal and short term workers. Canadian farming operations rely on approximately 50,000 migrant workers annually, who typically come from Mexico, Central America and the Caribbean.

The workers come to Canada under two programmes, the Seasonal Agriculture Workers Programme (SAWS) which allows for short term employment in Canada usually employed in planting and/or harvesting crops, and the Temporary Foreign Worker Programme (TFWP) which allows for stays up to two years, a programme most often used by livestock producers.

The Ontario Federation of Agriculture (OFA) labelled the ban on foreigners entering Canada, which includes temporary farm labourers, as “devasting” adding it could be a severe challenge to farm operations that rely on migrant workers.

The Ontario Fruit and Vegetable Growers Association (OFVGA) posted a tweet saying of the travel ban, “We recognize the news yesterday came as a shock and if not solved has serious implications for individual growers and the sector as a whole.” The association added on their website ” The OFVGA is working with government to determine ways in which growers can access workers without putting the health of Canadian citizens and foreign workers at risk, and maintain domestic food security.”

For the time being, grocers are attempting to refill empty store shelves as quickly as possible but admit that some items may be out of stock temporarily.