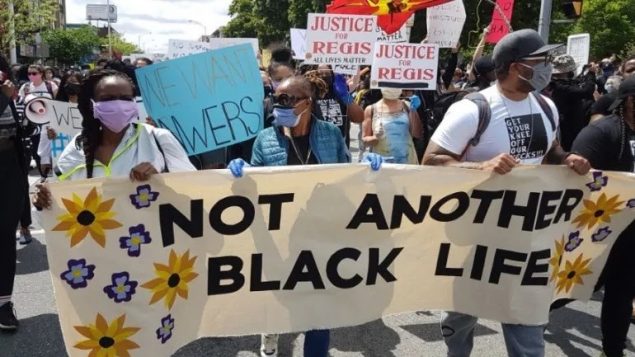 Canadians take to the streets for anti-racism rallies

Sparked by the death of George Floyd last week in Minnesota, Canadians took to the streets this weekend to participate in anti-racism demonstrations across Canada — a country that Amnesty International said last year is fraught with racism.

The demonstration in Montreal — where blacks have long accused local police of systemic racism — turned violent Sunday evening when demonstrators clashed with police, windows were smashed, fires were set and projectiles were thrown.

The Montreal confrontation came a day after thousands gathered peacefully in Toronto to demand answers about the death of Regis Korchinski-Paquet, who fell from the balcony of a 24th floor apartment last Wednesday as police were investigating a domestic incident in the building. 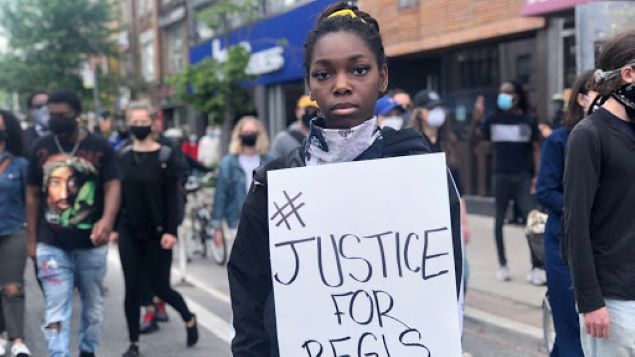 Sore Sanni, 17, holds a sign at a rally in Toronto on Saturday following the death of Regis Korchinski-Paquet, who fell to her death from an apartment balcony in Toronto’s High Park neighbourhood on Wednesday. (Lorenda Reddekopp/CBC)

Her death has drawn widespread community reaction and online attention after her cousin and mother took to social media following her death, initially claiming she was pushed off a balcony by police.

In a statement released on Saturday, Knia Singh, the family’s lawyer, said family members are now “waiting on evidence from the investigation before any further conclusions can be made,” adding that statements made prior to May 28 are not part of the official Korchinski-Paquet statement.

Demonstrators chanted “not another black life,” “abolish the police,” and “no justice, no peace” as they wound through the downtown wearing face masks to prevent the spread of COVID-19.

On Friday, Toronto police Chief Mark Saunders urged calm in the wake of Korchinski-Paquet’s death, warning of an information “vacuum” faced by police that risks being filled by “opportunists.”

“A lot of it is misinformation, a lot of it is lies,” Saunders told reporters, emphasizing police are legally bound from speaking about cases while investigations by Ontario’s police watchdog, the Special Investigations Unit, are being carried out.

While the rallies also remained peaceful in Vancouver, Calgary and Windsor, Ontario, tensions flared in Montreal after the formal rally had concluded and some demonstrators had made their way back to the starting point, near the city’s police headquarters, south of St. Antoine Street on the edge of Old Montreal.

About three hours after the demonstration began, police declared it illegal — deciding to do so, they said, after projectiles were hurled at them.

When police called on protesters to disperse, some refused. 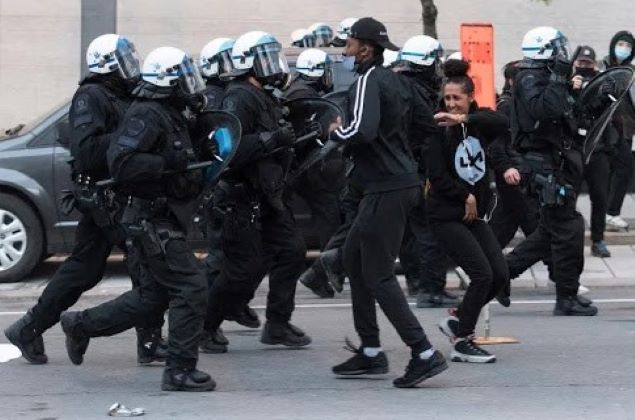 Police push back protesters during a demonstration calling for justice in the death of George Floyd and victims of police brutality in Montreal on Sunday. (THE CANADIAN PRESS/Graham Hughes)

Some people were seen throwing rocks at the windows of a Bell Canada building in the neighbourhood, and others smashed the windows of Steve’s Music Store and stole guitars.

Merchants on Ste. Catherine Street later told The Canadian Press that “hundreds” of stores on the city’s most-famous thoroughfare were smashed.

Montreal is no stranger to anti-racism rallies; they are held annually.

Last October, hundreds turned out in the pouring rain to demonstrate a pair of laws enacted earlier in the year by Quebec’s provincial government that protesters said fueled discrimination.

Last December, a report based on a survey by Environics Institute for Survey Research examining racism in Canada found that one in five Canadians experiences discrimination either regularly, or from time to time.

The survey found that just under 40 per cent of racist reported incidents took place on the street.