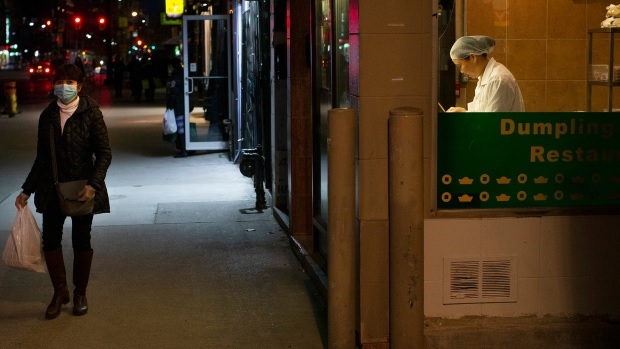 A passer-by carries take-out food as a restaurant worker is seen in a window in Toronto's Chinatown on Saturday March 21. A new survey suggests that two out of three Canadians support nighttime curfews should the COVID-19 pandemic continue to expand and governments recommend them. (THE CANADIAN PRESS/Chris Young)

On the day when Ontario set a new single-day record of COVID-19 cases–that included 15 more deaths linked to the illness--a new public opinion survey suggests that two out of three Canadians are ready to support temporary nightime curfews if the pandemic continues to grow.

The 1,388 additional cases reported in Ontario marked the the third time in four days that record daily case counts were set in the province, where the official death count connected to COVID-19 is now 3,260.

As cases increase in the country’s most populous province and elsewhere in Canada, the Leger and the Association for Canadian Studies survey found that majorities in all age groups–in every part of the country–backed the idea of curfews if the COVID-19 pandemic were severe and public health officials recommended it.

The findings appear to be in keeping with previous surveys that showed that Canadians tend to accept government anti-COVID-19 rules without a great deal of disagreement, though sometimes they find the warnings overblown–more readily than Americans.

“We’ve seen since the beginning of the current crisis that Canadians tend to be largely supportive of government initiatives,” says Leger vice-president Christian Bourque.

Bourque says the differences between the reactions of Canadians and Americans speak to divergent national characteristics that are centuries old.

“In Canada we have the Red Tory and very British collectivism that’s still part of our roots culturally. Whereas in the States there’s sort of a rejection of the state telling us what to do, that government has no business in my personal affairs,” Bourque said.

Not surprisingly, enthusiasm for a temporary curfew in Canada–10 p.m. to 5.a.m–varied with age.

Fifty-five per cent of respondents aged 18 to 34 said they would support a curfew, while three-quarters of those aged 55 and over endorsed it — including 80 per cent of those over 65.

Two out of three respondents between the ages of 35 and 54 supported the idea.

Governments across the country, including Manitoba’s last week, have floated the idea of a curfew as they struggle to contain the virus. 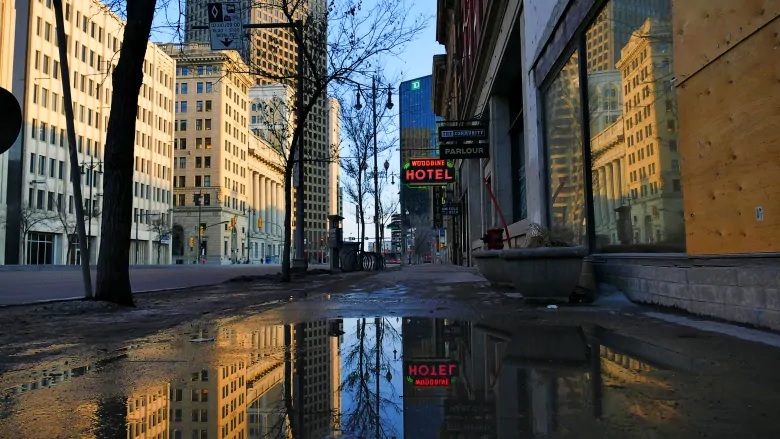 An empty street in Winnipeg in March, near the start of the pandemic. After floating the idea of imposing a curfew in the province last week, Manitoba Premier Brian Pallister rejected the idea on Monday. (Tyson Koschik/CBC)

The Leger survey found people in Alberta, Ontario and Quebec were less inclined to support a curfew, with fewer than two-thirds of residents supporting it.

In B.C., Saskatchewan, Manitoba and the Atlantic provinces, 70 per cent of respondents said they would back a curfew.

Bourque says the differences in opinion could be partly because different rules are in place in various regions.

“In Quebec, with bars and restaurants closed, there’s nothing to stay up for,” Bourque said.

“But in some provinces–Alberta, for example–a lot of places are still open.”

While there have been sporadic anti-government-measures demonstrations since COVID-19 arrived last March, an online survey in September found 88 per cent of respondents in Canada said they opposed anti-mask demonstrations while 12 per cent supported them.

But it appears the vociferous–though not necesarily voluminous–opposition is not about to go recede anytime soon.

This past weekend, about 2,000 people marched through the streets of Aylmer, Ont, chanting “Facts over fear” and “No new normal.”