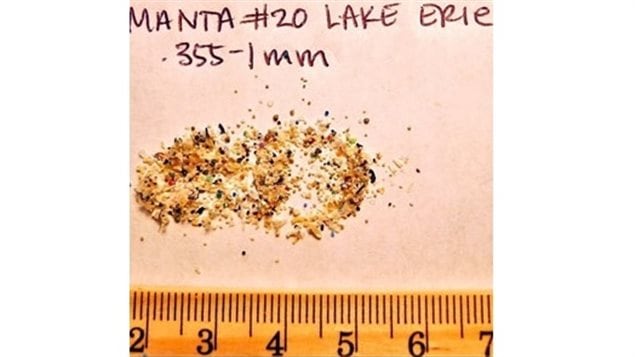 Tiny microbeads, used in a variety of consumer products, are not filtered out by water treatment plant
Photo Credit: CBC- As It Happens

An opposition party motion in the Canadian Parliament to declare plastic microbeads as a toxic substance has been passed this week.  It’s a step further in the process that could lead to them being banned n Canada

Recent studies have show that the miniscule beads of plastic are present in surprisingly high numbers in Canada’s Great Lakes. Researchers from the University of Waterloo in Ontario found for example up to 600,000 tiny bits of plastic per square kilometer in Lake Erie.

The tiny beads are used as abrasives in a variety of consumer products from toothpastes to facial scrubs. The beads range in size from 0.0004 to 1.24 mm, too small to be filtered out in water treatment plants. They absorb toxic chemicals in the environment and are often taken up by aquatic life who mistake them for food, and then can either accumulate as the move up the food chain, or cause digestive blockage and a weakening and possible death of the creatures that consume them,

Microbeads and plastic-Great Lakes to Arctic

Federal New Democratic Pary member and environment critic Megan Leslie had proposed the motion which would declare the beads as toxic and therefore require much stricter regulation in their use, and possible banning in consumer products

Within Ontario, Canada’s most populous province, a private member’s bill was recently introduced at the provincial level to ban of the manufacture and sale of microbeads in the Ontario. That bill passed second reading in the provincial legislature in March and should come into effect in two years time.

Several manufacturers meanwhile have said they will begin phasing out microbeads in the next coupld of years, replacing them with natural products such as oatmeal, and crushed nut shells.