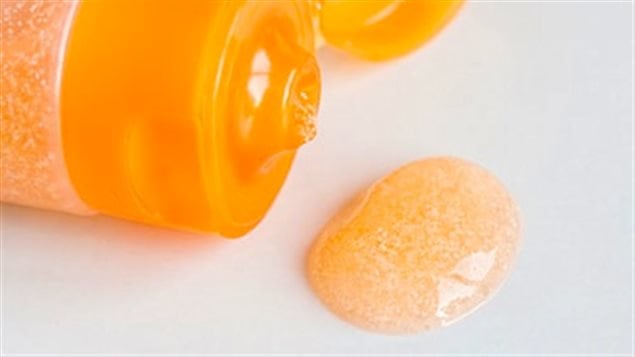 This body wash contains microbeads, which have replaced more natural exfoliants such as oatmeal and crushed nut shells. The microscopic beads are aslo found in some toothpastes
Photo Credit: ENVIRONMENTAL DEFENCE/NDP

They are very tiny beads usually made of polyethylene, which is a very common plastic used for example, to make plastic bags.

The microbeads are found in a wide variety of facial scrubs, body gels, and in toothpaste to act as an abrasive to scrub dead skin cells, or cleaning teeth.

Philippe Van Cappellen is a Canada Excellence Research Chair and professor of Earth and Environmental Sciences in the Faculty of Science at the University of Waterloo in Ontario.  On the university website he is quoted saying, “ We know more and more about ocean plastics, but, paradoxically, we have little information on the distribution and fate of plastic debris in the Great Lakes, the world’s largest freshwater resource,”

A review article by Van Cappellen and fellow researchers from Waterloo’s Ecohydrology Research Group appears as an open source publication in this month’s issue of the Journal of Great Lakes Research.

The University of Waterloo study says the problem is much bigger than thought. Among the Great Lakes, it found the highest concentration in Lake Erie and that certain areas of the Great Lakes have suspended plastics concentrations as high as those found in the so-called garbage patches accumulating within large oceanic gyres.

The microbeads are so tiny they bypass the water treatment process and so are released with treated water back into the environment.

However, along with other plastic garbage that breaks down into smaller and smaller pieces, they absorb toxins and then are mistakenly eaten by fish or shellfish, which in turn are eaten by birds which absorb the toxins or can be eaten by bigger fish which can end up on our plates.

There have also been cases where the plastic get lodged in fish and animal guts, blocking them so the creature dies of starvation.

The NDP’s Megan Leslie says it’s time for Ottawa to act. “It would be better to have a piece of federal legislation or regulation because otherwise we’re going to end up with this patchwork. Manitoba does this but Nova Scotia doesn’t allow that. It’s easier if we just do it at the federal level.”

The issue was debated this week in the House of Commons with the Conservative Party government saying Environment Canada is studying the dangers posed to wildlife and the environment by the plastic microbeads.

“The findings of the study will determine a federal-provincial action plan on the tiny beads”, said Colin Carrie, the parliamentary secretary to Environment Minister Leona Aglukkaq.  “The chemical management plan brought forth by our government will prioritize microbeads for assessment, which will benefit all Canadians,” Carrie told the House of Commons on Tuesday.

He added  “Our government supports including the issue of microbeads on the agenda of the Canadian Council of Ministers of the Environment meeting this summer.”

A 2014 study in the Arctic  showed the microbeads have travelled into the farthest reaches of the polar region.

The authors from the US Dartmouth University and the University of Plymouth in the UK say, “Our findings indicate that microplastics have accumulated far from population centers and that polar sea ice represents a major historic global sink of man-made particulates. The potential for substantial quantities of legacy microplastic contamination to be released to the ocean as the ice melts therefore needs to be evaluated,”

In the US, the New Jersey governor this week signed a bill banning the manufacture and sale of microbeads. Illinois has also banned microbeads, and nine other US states are considering similar measures.