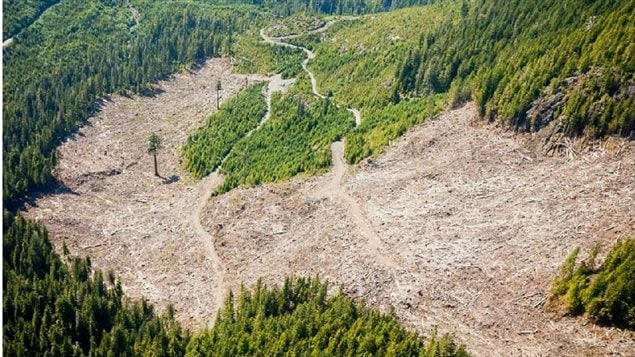 The Sierra club says even as the amount of remaining old growth forest is cut down, the logging process is speeding up.

The environmental group says from 2007 to 2011, about 76 sq km of ancient trees were cut annually, but that increased in the following years to 90 sq.km being cut every year.

Richard Hebda, the Royal B.C. Museum’s curator of botany and earth history says the old forests weave together a complex interconnected system of hydrology, soil formation, nutrient cycling and so on.

Loggin removes not only the trees, but also breaks up the living fabric holding those systems together.

Quoted in the Globe and Mail news, he says, ““We need a hard-nosed investigation of what we want these forests to be doing: Do we want to protect biodiversity? Do we want them to be very good at storing carbon? Then we can decide how much forest we actually need”. He adds, “I think the answer will be a much higher percentage than we now have.”

“It is only a matter of time before the logging industry runs out of old-growth trees and fully transitions to second-growth,” said Wieting. “But despite shrinking revenue and jobs from logging, and despite the increasing value of endangered old-growth for species, a diverse economy, climate action, and clean air and water, thousands of hectares of old-growth rainforest are still being cut every year.”

He adds, ““We are urging the B.C. government to take immediate action to protect and restore the coastal rainforests on Vancouver Island”.

The environmentalists say, to continue to log old growth forest will irreparably damage existing ecosystems, and the economy of towns and cities dependent on logging.

They urge a move away from old growth, to second growth forests.

A deal for protection and limited sustainable logging  on the mainland in the Great Bear Rainforest among logging companies, the B.C government, and First Nations aboriginal groups shows solutions are possible, according to the Sierra Club.

They quickly add that south of the agreement area  overcutting and lack of protection has resulted in rain forest areas along the coast in “a state of ecological emergency”.

Old growth, big trees are good for business. it makes more sense to bring the tourists in than to take the logs out”.

Preserving the old growth forests with their giant trees, and natural surrounding has caught the attention of the BC Chamber of Commerce.

They have begun to realize there is more economic value in promoting the area as an ecological tourist destination, than a logging resource.

Dan Hagar, president of the Port Hagar BC Chamber of Commerce quoted in the CBC says, “”People love history and people love this idea of environmental tourism. Old growth, big trees are good for business. it makes more sense to bring the tourists in than to take the logs out”.

Weiting and others say logging infrastructure is currently geared towards logging the ancient trees.  A government official noted that 70 percent of logging on Vancouver Island is old growth.

Weiting again points out that if the will is there on all parts, solutions like the Great Bear Rainforest deal are possible to transition the logging industry to second growth forest, respect First Nations interests, save the diverse ecosystems flourishing in the old growth forests, develop new industry like tourism, and all the while reduce carbon emissions.