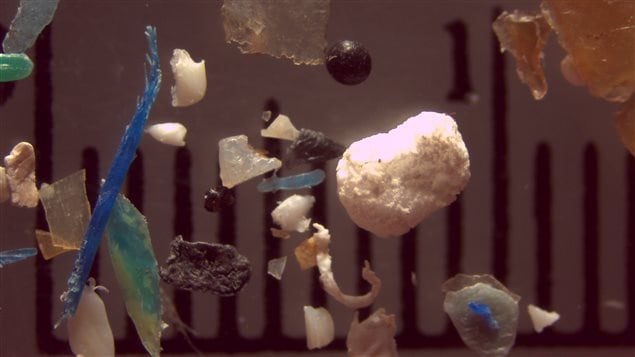 A variety of microplastic bits. taken from waterways in a sampling.
Photo Credit: USGS

The International Joint Commission (IJC) which monitors water conditions in the Great Lakes of North America, has been studying the increasing concern over microplastics in the system.

The IJC has just released IJC) released a report to the governments of Canada and the United States recommending several actions to reduce and eventually eliminated microplastics from entering the waterways and lakes.

Microplastics are beads or fragments of plastics, generally defined as being five millimetres or smaller –which can come from plastic bags, bottles and other sources which have been broken down into tiny fragments, but include microbeads from body scrubs and toothpastes, and fibres released during clothes washing, and even from the filters of discarded cigarettes.

The IJC conducting meetings last April at which some 33 experts in a variety of related fields provided scientific information.

The issue of microbeads is being dealt with as both Canadian and American governments have instituted bans on their sale and manufacturing being implemented in stages until fully banned by mid 2019.

However microplastics from all other sources will continue to be a growing concern which the IJC report says is “ a more complex problem requiring more complex policy responses”.

The report recommends that Canada and the United States develop a binational plan with measurable goals to prevent microplastics from entering the Great Lakes, using approaches such as policy, market-based instruments, outreach education and research.

In the latter point, the IJC notes that there are still large gaps in knowledge and understanding of the dynamics and effects of microplastics on aquatic and human health and on the Great Lakes ecosystem.  The report encourages more scientific studies be undertaken in order to better understand how to deal with the issue.

As Mr Caux says, the IJC hopes to get governments at various levels looking into the issue and taking action before it is revealed to be a critical threat to the environment and people who rely on the Great Lakes