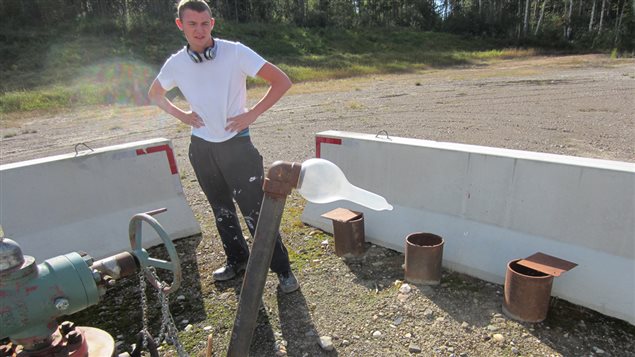 Field assistant Makz Werring places an inflatable balloon on the vent pipe of a well suspended in 2010l to measure the flow of gas. Pressure and volume of methane being vented is enough to quickly inflate the condom
Photo Credit: John Werring

The environmental “footprint” of fracking and the oil and gas industry is about to change dramatically, and not for the better.

A new study by the environmental group David Suzuki Foundation and St Francis Xavier University, shows about 50 percent of wells are either leaking or deliberately venting, methane which is an extremely potent greenhouse gas.

Ian Bruce is the Director of Science and Policy at the David Suzuki Foundation, a non-profit environmental and conservation group.

A study of a variety of about 1600 oil and fracked gas sites in north-eastern British Columbia says methane emissions are two-and-a half times greater than what the industry has been estimating and reporting.

The study was published in the science journal Atmospheric Chemistry and Physic under the title, “Mobile measurement of methane emissions from natural gas developments in Northeastern British Columbia, Canada”  (HERE)

The fact that the methane emissions are so much higher than currently reported is important as methane is a far more potent greenhouse gas than carbon dioxide.

According to the Suzuki Foundation, the study shows that B.C.’s Montney region alone leaks more than 111,800 tonnes of methane into the air every year. This is the climate pollution equivalent of burning more than 4.5 million tonnes of coal or putting more than two million cars on the road.

The group Environmental Defence also released a report this week showing that Alberta’s methane emissions are also much higher than is being reported.

Bruce says that based on the new standard of a 20-year time frame, methane is some 84 times more potent than C02.

Using the latest technology the researchers visited a variety of wells, either still operating, suspended, or capped and abandoned.

Bruce says in some cases they detected leaks, while in others there was simply venting of methane.Easy fix-the technology exists

While he says this is a very significant source of Canada’s greenhouse gas emissions, the technology already exists to vastly reduce these types of emissions.

What’s lacking is regulation and inspection.

He says he hopes this report will spur governments at both the federal and provincial levels, to see the gravity of the situation and quickly act to create and enforce stricter rules.