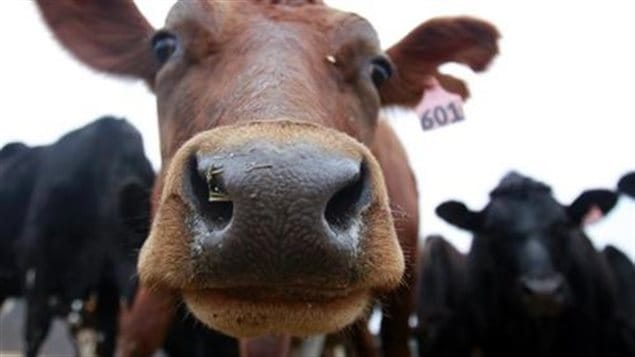 Hang tough, Bossie, you could be feeling a whole lot better in the very near future thanks to some new Health Canada guidelines.
Photo Credit: AP Photo / Mike Groll

For the first time since 2007, Health Canada is planning some progressive changes to Canada’s Food Guide–changes that–if followed–will go a long way to make a whole lot of Canadians feel a whole lot better–and healthier.

Make that Canadian humans and Canadian animals.The Canada Food Guide has been around since 1942 and it’s about to undergo one of the biggest updates in its history

And, animal activists say, it’s not just humans who will benefit.

The government’s new healthy food recommendations, the activists say, will go a long way to helping the beleaguered, overfed animals that populate our food chain and don’t do a heckuva lot for our health.

Among other things, the new guide promotes plant-based protein sources and eliminates dairy as a food group.

The new guide, likely to be published this fall, also encourages Canadians to avoid saturated fat, which is found almost exclusively in animal-based foods–foods that are doing little to improve our collective health.

Those who have long promoted healthy human lifestyles are rejoicing about what is to come–very likely a shift away from meat and dairy products.

The recommendations also have a lot of hard-working animal activists ecstatic.

A Canadian who has long promoted both human and animal health is Anna Pippus.

She is a Vancouver-based attorney who also works for the animal-rights organization Animal Justice as its Director of Farmed Animal Advocacy.

I spoke to her by phone Thursday about the new Canada Food Guide’s recommendations and their ramifications. There are many.