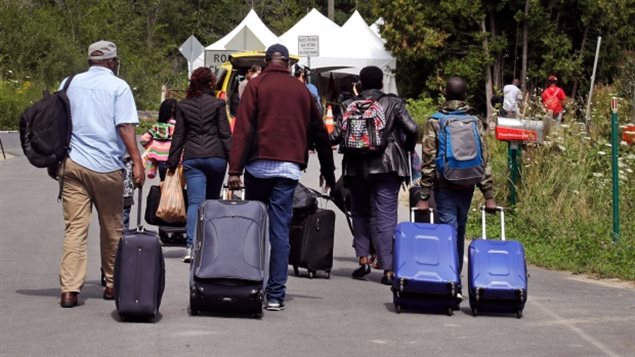 About 7,000 Haitians fearing the end of a protection policy in the U.S that could have seen them deported, decided instead to cross illegally into Canada this summer and claim refugee asylum. A temporary tent has been erected at the illegal crossing point to process them.
Photo Credit: Charles Krupa/Associated Press

Could U.S.policy cause a tidal wave of immigration and asylum claims in Canada?

U.S. President Donald Trump has announced he will end a policy known as DACA, which has caused great turmoil for tens of thousands of undocumented people in the U.S.

Could that mean another wave, or even tsunami of people crossing illegally into Canada and claiming refugee status, or simultaneously a wave of proper channel immigration requests?  Many U.S, “Dreamers” would score well on Canada’s Express Entry” immigration policy according to Guidy Mamann.

He is an immigration lawyer, and policy analyst, founding partner of Mamann, Sandaluk & Kingwell based in Toronto, Ontario.

The American policy instituted by former U.S. President Obama in 2012 known as DACA stands for Deferred Action for Childhood Arrivals. It said children brought illegally into the U.S. would not be deported for at least two years and could be given work permits.

An act called DREAM (Development, Relief, and Education for Alien Minors Act) was to enable them to potentially be granted permanent residency in the U.S. That was never passed.

Now with the threat that DACA will be revoked, thousands of people living in the U.S. are wondering what to do, and that may mean moving to Canada.

Mamann says many of these young people would qualify to become immigrants due to language, university education, and work experience. Many others however would not and may choose to follow the thousands of Haitians who have crossed illegally into Canada this year, putting a strain on refugee resources.

A Canadian Senator recently proposed Canada give “special consideration” to so-called Dreamers,  and taking in about 30 thousand of the of them..

Mamann points out that Canada already has thousands of so-called “illegal” children in Canada and that we should try to clear up that situation first through something similar to a DACA/DREAM programme here.

Then, if there’s money left, perhaps consider taking in others.

He notes that Canada is already accepting more refugees and immigrants than ever before and our refugee and other systems are overloaded.

He says allowing the overly porous border to continue could turn Canadians generosity, already tested by thousands of illegals, into real animosity against foreigners. That in turn could result in a shutting of the door to real refugees in need from abroad, something he would not like to see happen.