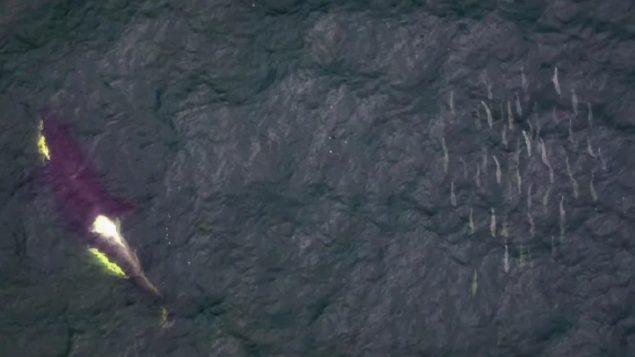 A southern resident killer whale swims past a school of salmon near the Fraser River. (Keith Holmes/Hakai Institute) 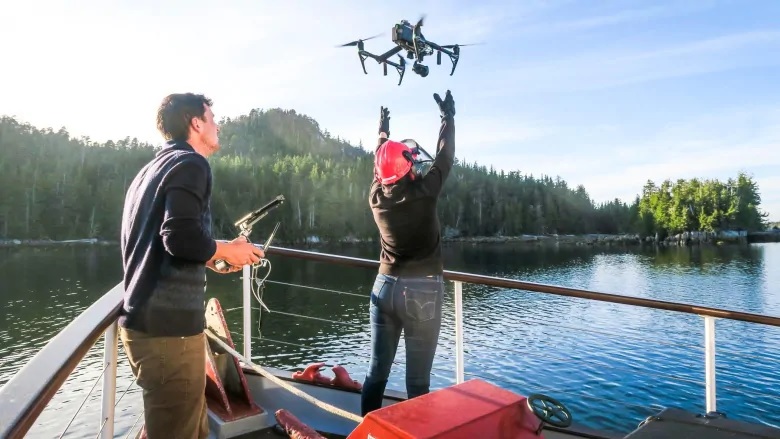 Scientists are now turning to drones as an improved way to observe whale behaviour. Studying from boats can create disturbance and alter their behaviour as the boat has to get fairly close and is an intrusion, with added problem of engine noise and a limiter surface level observation.  The drones, flying at 30 to 60 metres above the surface give an entirely new view as they are able to observe underwater activity and the whales seemingly do not notice them at all and as such their behaviour is unaffected.

The research, filmed in cooperation with the Hakai Institute, will help researchers determine if the  endangered southern podss are getting enough of their preferred prey, Chinook salmon, to meet their nutritional needs.

The filming took place in August and September of both northern and southern resident whales.

“In order to help these whales, we need to know more about them – how they hunt, how they forage and where their food is,” said Andrew Trites, project lead and director of the Marine Mammal Research Unit (MMRU) at UBC’s Institute for the Oceans and Fisheries. “This is the first time drones have been used to study killer whale behaviour and their prey. It’s allowing us to be a fly on the wall and observe these animals undisturbed in their natural settings.”

As an example of the drone advantage, project lead Andrew Trites, project lead and director of the Marine Mammal Research Unit (MMRU) at UBC’s Institute for the Oceans and Fisheries said that from the ship they could see a northern resident mother and calf swimming closely, but the drone showed that in fact they were constantly touching and socializing with each other. 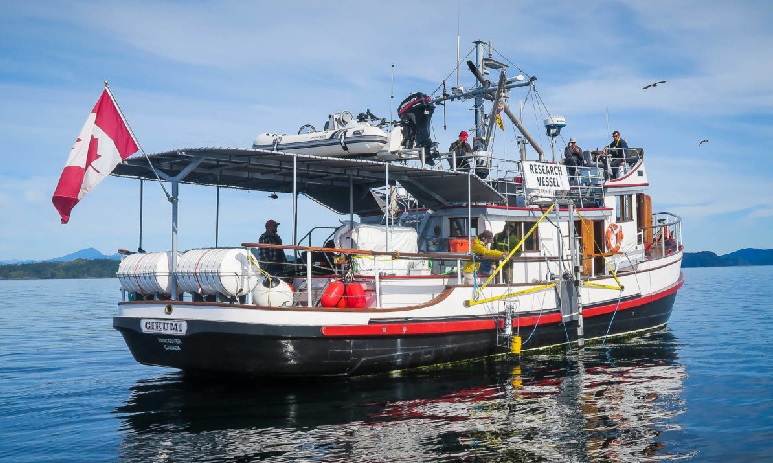 The research vessel Gikumi, used by a UBC researchers and Hakai Institute to study southern resident killer whales in the Fraser River in August 2019. (Andrew Trites/UBC)

The researchers will now spend time analysing and comparing the foraging and hunting techniques of the two groups, and also comparing such data as water temperatures and salinity, along with the number and depths of the preferred prey, Chinook salmon. The results of the data analysis are expected to take several months.

The project is part of the federally-funded Whale Science for Tomorrow initiative, with additional funding and support from the Province of British Columbia, the Pacific Salmon Foundation, the Hakai Institute and Vancouver Whale Watch.

The research was conducted under DFO and UBC animal care permits.