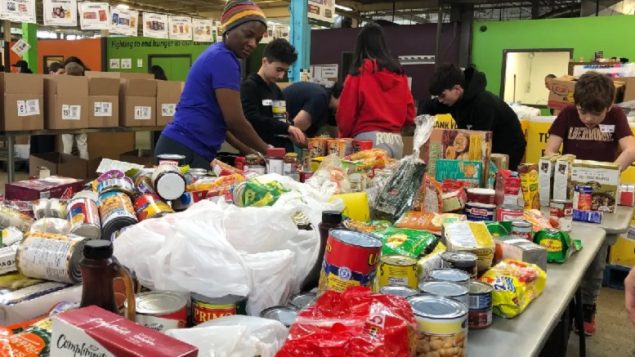 Volunteers sort through food donations at the Daily Bread Food Bank in the greater Toronto area as part of their 2019 spring drive. A new report says more people are needed food banks just to get by (Christopher Mulligan/CBC)

Steady increase in people needing food banks, including those with jobs

The annual report is published by the organisation Feed Ontario (formerly the Ontario Association of Food Banks) represents 130 food banks, and over 1,100 affiliated food relief agencies. Their “Hunger Report 2019” notes that over 510,000 people needed food banks in the province, with over 3,000,000  visits during the one year period from April 1, 2018 to March 31. 2019.

This represents an increase of over 8,800 more people from the previous year.

What is more worrisome is that even people with employment income are needing the additional food help. Ontario boosted the minimum wage to $14/hour last year, but many visiting the food banks list low wages and insufficient hours as their reason for needing the food banks.

Some of the social assistance programmes such as Ontario Works  or the Ontario Disability Support Program only provide living funds which are far below the poverty line.

Even though the federal and Ontario provincial unemployment rates are at the lowest rate they’ve been in years, a combination of low salaries, temporary and “gig” jobs and overall precarious employment, has been pushing more of the so-called working poor into a need for assistance from food banks. Feed Ontario says the number of those with employment visiting food banks has increased 27 per cent in the last three years.

The executive director of the organisation, Carolyn Stewart calls the situation, “unprecedented”. She  says even though people are working, the increase shows more people can’t afford to make ends meet on their own.

In a press release she says, “Ontario’s job market is changing. Not only are we seeing a rise in casual and contract employment, but we are seeing more adults having no choice but to work in temporary or minimum wage positions. Oftentimes, these positions do not provide consistent wages or work hours, and seldom provide employer health benefits or paid time off. This is reflected in Ontario’s food bank data, which indicates ‘low wages and/ or insufficient hours’ as one of the most common reasons for needing support.” 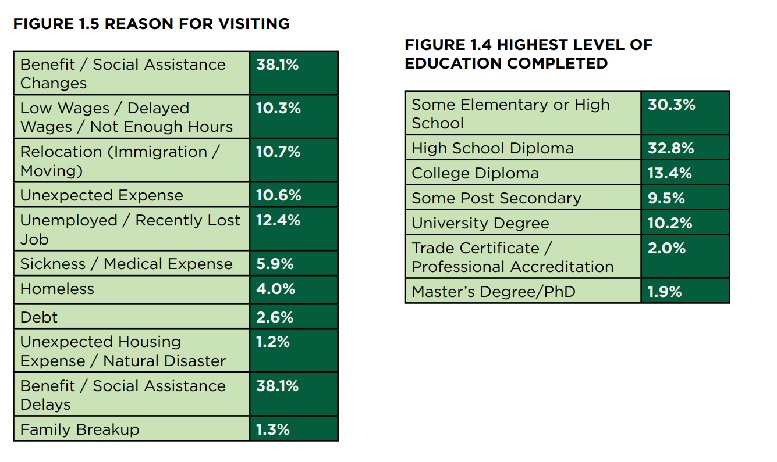 The report analyses the work situation as well noting that minimum wage earners account for 15 per cent of the Ontario work force, half of them over age 25, and a third of those have a post-secondary degree.  Temporary work positions, contract, casual  and seasonal, have increased by 31 per cent over the past two decades.

“this means that 1 in every 10 Ontarians has insufficient income to afford a modest, basic standard of living, including: a nutritious diet, clothing and footwear, shelter with electricity, heat, and water, and transportation” Feed Ontario Hunger Report 2019

Valarie Tarasuk, professor University of Toronto’s Department of Nutritional Sciences, said Feed Ontario’s findings paint only a partial picture of life for the working poor in Ontario suggesting that

In 2018 the federal government established a base poverty line of the cost of basic necessities, housing, food, and other basics. Feed Ontario says that using this “market basket measure” well over 3,400,000 Ontarians are living in a poverty situation with almost 1, 500,000 living below the poverty line. It says. “this means that 1 in every 10 Ontarians has insufficient income to afford a modest, basic standard of living, including: a nutritious diet, clothing and footwear, shelter with electricity, heat, and water, and transportation.