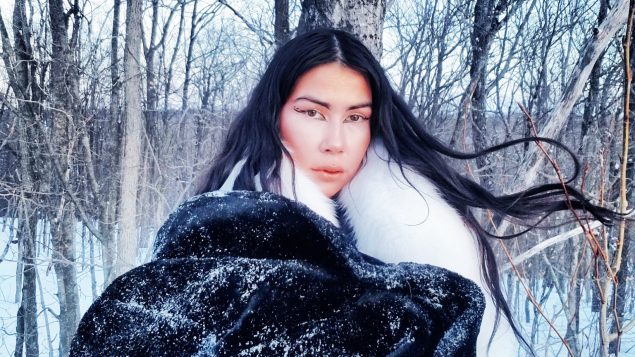 Indigenous singer Anachnid was nominated on Oct. 1st, 2020, for two ADISQ awards as Indigenous Artist of the Year and Anglophone Album of the Year for "Dreamweaver", her first opus released last February. (Photo Credits: Anachnid)

When the Montreal-based singer Anachnid picked up the Zoom-phone for our interview, she was still in shock after an emotional week that started with the death of Joyce Echaquan, an Indigenous Atikamekw woman in a Quebec hospital where she was insulted and humiliated.

“I made donations to support the family because Joyce (Echaquan) had seven kids, and also to pay for the funerals and for a lawyer. The government needs to act on this,” said the young singer, who otherwise shies away from politics.

The week ended on a more positive note when ADISQ – Quebec’s Association for the Recording, Performing and Video Industries – nominated Anachnid for two awards as Indigenous Artist of the Year and Anglophone Album of the Year for Dreamweaver, her first opus released last February.

Last June, Dreamweaver was selected among the 40 albums that make up the 2020 Polaris Music Prize Long List. Although her album didn’t make it to the Short List, her nomination by Canada’s best music critics represented an important artistic recognition.

“I am very happy because this is my first album. I feel like I am in a movie,” said the Montreal-based artist who is still in her mid-twenties.

“I am particularly honoured to be nominated for the ADISQ Anglophone Album Award, next to artists that I love, such as Leonard Cohen, Patrick Watson, and with Elisapie in the Indigenous category.”

“Anachnid is a mix between my real Indigenous name and my spirit animal, which is a spider. It was given to me by an elder who told my Mom : ‘Your daughter will react to circumstances before she knows what happens’. I guess that’s how the spider energy brought me to music.”

Anachnid learnt the piano and started composing in her teens, but suffered from a lack of recognition. “When I went to a non-Indigenous high school and composed my first song at 13, and I performed it in front of everyone, no one believed that I wrote it. So I stopped making music for 10 years,” she said.

Luckily, a creative workshop with Montreal’s Indigenous music powerhouse Musique Nomade helped her get back on the musical track two years ago, launching a booming career. Below is a video of Anachnid’s album release with an audiovisual – and physical – spider web environment designed during her residency at Montreal Arts Interculturels.

Anachnid wrote and composed the 10 tracks of Dreamweaver over the course of the last two years with her producers Ashlan Phoenix Grey and Emmanuel Alias. The album, which weaves electro-pop effects into natural soundscapes, evolves from a soft and dreamy Phoenix to a venomous climax in Anachnid and dissolves into a more ethereal space with Sky Woman, one last track which prepares you to start listening again in loop the whole album, starting with Phoenix…

“The spider protects children from nightmares. That’s why dreamcatchers look like spider webs. And that’s why we take them in the dreamworld, away from bad things.”

Many listeners were caught in Anachnid’s web and have felt the addictive power of her Dreamweaver. The production mixes her sensual voice with trap, indie, soul and trip hop. The urban Indigenous singer – who was raised in the woods but now lives in downtown Montreal – has made sure a discrete Indigenous touch is ever present in her album thanks to animal sounds, drum and flute evocative of her ancestral Oji-Cree and Mi’kmaq roots.

‘The blood of Mother Earth’

Although she sings mainly in English – for now – the Quebec singer speaks in Algonquin – the language used in Gatineau region, where she grew up – on Animism. In an interview, she agreed to translate the lyrics for us: “Water is the blood of Mother Earth. The blood of Mother Earth is in our body.” In other words, we are made from the same sacred material, water.

Animism is based on this belief that all natural creations are alive and humans are connected to this energy.

“When I feel too arrogant, I go to the woods to wind down. And I switch my cell phone off.”
“I grew up in nature and it helps me survive. In the city, your ego gives you a sense of personality, but in nature, it is completely the opposite. You need to be present and aware, but discrete. That’s why we wear mocassins.”

This is also why she howls like a wolf on this song, as a way to communicate with the animals, and with the spirits of ancestors, she said.

“I was taught how to howl as a child, so I can let wolves know where my hunting territory is. Wolves are very smart. They don’t like humans, because they know that (we) have a malice that other animals don’t have.”

The ‘Indian girl from Montreal’s Quartier Latin’, as she calls herself, is also a romantic. This is why she has decided to call her third song on the album La Lune, instead of The Moon. The melancholic tune starts with the sound of fire cracking, and its waltzy, soulful vibe reminds Lhasa de Sela, another Montreal singer who influenced Anachnid.

The young artist describes her music – as well as her interpersonal relationships – as constantly balancing between her masculine and feminine energy.

“You can tell in my music that I am two-spirited. Sometimes I am very vulnerable, and sometimes I am very aggressive. The energy of battle and warfare is there, as well as the energy of peace, vulnerability and communication. So if someone upsets me, I have to decide if I should use my masculine side in this situation, or follow what my Mom told me and be peaceful.”

Even before the album was released, everything happened very fast for Anachnid. In May last year, the singer and musician won the Indigenous Songwriter of the Year Award in Winnipeg, Manitoba, for her first single, Windigo.

Even if her Mi’kmaq mother didn’t agree with the lyrics, which she found conflictive, Anachnid explains that the song is a tribute to her ancestors who resisted colonization :

The young woman, who also studied in Arts, has designed herself the mischievous character speaking in the song, with a bottle in one hand and a cloud of smoke coming out from her cigarette. She says the song denounces the stereotypes about Indigenous people, seen as addicted to drugs and alcohol.

“In the Indigenous culture, Windigo is a cannibalistic spirit who is always greedy and hungry and it will prey on humans,” she explains.

“I really associate capitalism to that. I believe this energy is a virus that takes over the people who otherwise would be in position to change the system and take over the world.”

“It is a big ominous spirit and no matter where you go, you will see that colonization will often bring cheap resources like Coca-Cola for Indigenous people to become dependent on – and diabetic,” she adds.

The song also explores the trap style that went global in the last decade since its debuts in Chicago. Except that Anachnid, unlike most American rappers, knows since her childhood how to set up trap lines to hunt small game, as she reminds us in Windigo : ‘This is Native trap trap / And I suck at rap rap.’ 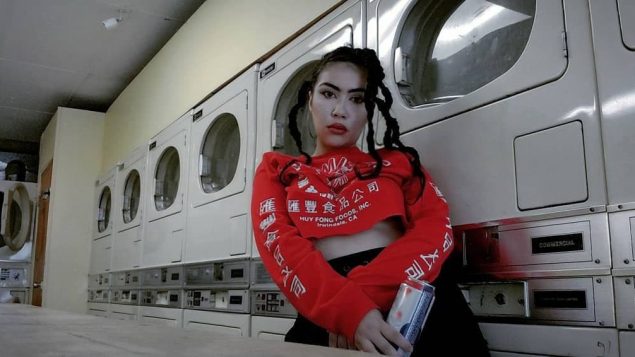 “Now wearing long hair is seen as ‘ghetto’, low-class, but wearing braids is traditionally a way to prevent our hair from getting dry, a way to take care of it and protect it,” says Montreal Indigenous singer Anachnid. (Photo Credits: Anachnid)

The tune Braids, which includes house, tribal and jazzy beats, definitely reaches out very far. Anachnid initially wrote it for her long-haired younger brother, who lives far away from her in Wakefield, north of Ottawa.  “I wrote it to honour his dignity,” she said, but also the dignity of all humans, men, women, or from the LGBTQ+ community.

An Afro-American woman from New Orleans who typed in “Braids” on Google as she was getting prepared to do her hair discovered Anachnid’s song and liked it so much that she wrote to the Montreal singer and offered to take care of her makeup whenever she performs in the capital of Louisiana. This, and the sharp increase in her number of Instagram followers, lets Anachnid know that she is on the good track. 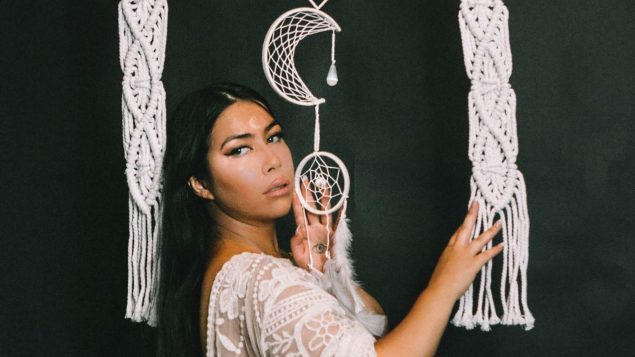 Anachnid called her third song on the album “La Lune” instead of “The Moon” because she says it sounds nicer, and because she is romantic. (Photo Credits: Anachnid)

This inclusive approach and empowering message resonates among Indigenous and Afro descending populations, in particular among women. Anachnid’s song Now Wow We, written in collaboration with the Congolese-Canadian artist Annie Sama in 2018 has recently been chosen by the clothing store Reitmans to empower women and support charity causes.

“Vamos a unirnos” (Let’s unite). This is also what Anachnid repeats on Now Wow We, as a solidarity gesture towards her Mexican Indigenous sisters, many of whom have disappeared in the border city of Ciudad Juarez.

The Woman from the sky who falls on earth

Sky Woman. It is the title of the last song on the album, but it’s also the meaning of Anachnid’s Indigenous name. She was called after the legend of the creation of the Earth, when Sky Woman, who lives with her people in the sky, is betrayed by her husband. She falls from the sky and is saved by animals, who accommodate her on the back of a turtle, thus creating the world as we know it.

Anachnid tells that her final song is meant to empower women:

“In the end (the Sky Woman) says: ‘I am the light at night / Your hate can’t reach so high’. No matter what someone does to her, her inner core will stay intact. I think that’s what empowerment is: you don’t take things too personal. You just focus on you. And that’s what the album is about.”