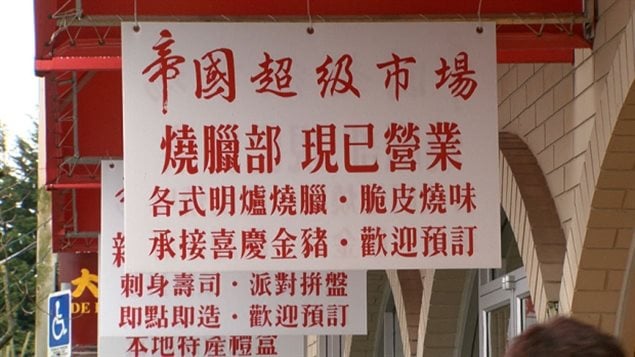 The issue of Chinese only signs has created tensions in Richmond BC for several years. A bylaw in council this week sought to limit sign clutter only until a last minute motion passed to add a requirement for 50% English on future signs
Photo Credit: via CBC

British Columbia: Back again- the language on signs

The town of Richmond British Columbia has grown exponentially in the past few decades.

From what had been a relatively sleepy area decades ago of mostly “white” Canadians, some 78.000 in 1981, with a tiny minority of Chinese, and other South Asians, the city population grew rapidly and changed even more rapidly.

Indeed the majority of residents , some 6 out of 10, were not born in Canada.

This influx has created tensions, not the least of which have focused on business signs.

Many original residents say they feel like outsiders in their own community and country because too many signs are in Chinese only.

The issue first boiled over in 2012, when a petition was sent to city hall to force businesses to include English on signs.

Another request for a bylaw change was rejected again a few years later. On both occasions, council said they’d prefer to work with business owners to modify signs, and lawyers suggested such a law would invite a Charter of Rights legal challenge.

A city consultation in 2016 showed a strong desire for signage regulation which required English.

This week a sign bylaw modification was proposed by council.

This however was to reduce signage clutter in the city, but with no language regulation. However a last minute amendment to require all future signs carry at least 50 per cent English.

The motion passed 5 to 4 with Richmond Mayor Malcolm Brodie voting against it.

Mayor Brodie was quoted in the CBC saying, “”There’s the issue of community harmony: you can either lay down bylaws … or you can work with your community”.

Mayor Brodie said such a bylaw would take some time in any case as  exact wording would need approval, then go through a council vote, and then go to a public hearing.