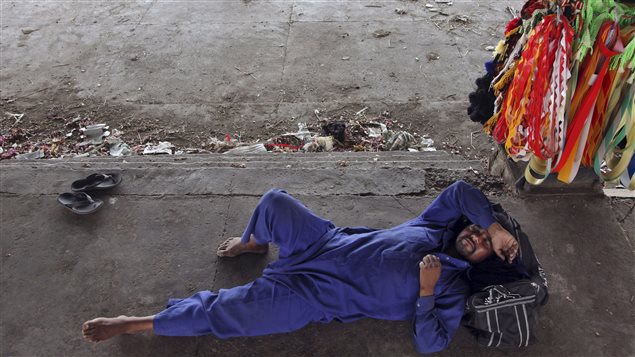 An Indian vendor rested during a killer heat wave in 2015. More than 3,500 people in South Asia died and a new study suggests things may get worse.
Photo Credit: Channi Anand/AP Photo/2015

A new study published this week found that unless there is a decrease in greenhouse gas emissions worldwide, climate change will make parts of South Asia uninhabitable by the end of this century. Published in the Journal Science Advances, the study was very detailed and projected not only temperatures for the region, but also humidity. This is significant because humidity affects the human body’s ability to cope with heat.

Projections show that unless mitigated, climate change will cause heat waves in parts of southern Pakistan, northern India and Bangladesh that are not survivable for humans. “Climate change, without mitigation, presents a serious and unique risk in South Asia, a region inhabited by about one-fifth of the global human population, due to an unprecedented combination of severe natural hazard and acute vulnerability,” states the report.

“That’s a huge challenge and it’s not just the human cost to those people, but actually the global instability that kind of mass forced migration will cause is so great. If we think of the Syrian refugee crisis as one of the big challenges of our time, that’s involving five million people who’ve fled from Syria. This is eight times as many people. This is just people in South Asia. This study didn’t look at other regions of the world.”

Deaths from heat waves are not new. A heat wave in India and Pakistan in 2015 killed about 3,500 people and, in 2003, more than 52,000 people died of a lengthy heat wave that swept Europe for several weeks. The figure may be low because coroners’ reports may not have specifically listed heat as the cause of death, but things like cardiac or respiratory failure that were listed may have been attributable to high temperatures.

The good news coming out of this report, says Hoffman, is that the predictions for South Asia will not come true if countries can meet the commitments they made in the Paris Agreement to reduce greenhouse gas emissions.

“That really does depend on bold action and it depends on the political will for that kind of action. So, I think that people around the world need to be demanding from their governments to take this challenge seriously and work together.

‘The stakes are too high’

“I think the stakes are too high and it’s not just a problem for the future that we’ll deal with at a later time. We’re already seeing the consequences. And today’s children are going to see some very stark consequences unless we increase our level of action.”