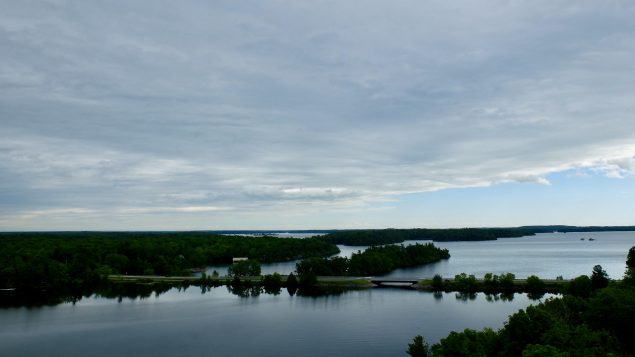 Some waterways in Canada’s Great Lakes region now as salty as ocean: study

Road salt levels have hit new record levels in Canada’s Great Lakes region, making some waterways as salty as the ocean according to new chloride maps revealed by environmental advocates.

“Since 2007, we’ve seen an increase in chloride’s impact of chloride levels in the summer months. So the map is showing a spatial impact of chloride contamination,” said Elizabeth Hendriks, WWF Canada’s vice-president of freshwater.

The study focuses only on the Great Lakes region but the organisation has seen trends increasing in large urban centres anywhere where significant development is happening over time as well.

Road salt, which is a mix of sodium chloride, calcium chloride and magnesium chloride is widely used in Canada during icy winter to keep public areas safe.

Public Road agencies use 7 million tonnes of road salt every year in Canada according to WWF. Road salt use by the private sector and small towns is not currently tracked or controlled in the province.

The problem of road salt affecting the environment is not new since many reports have been published over the years on the negative impact of this product. 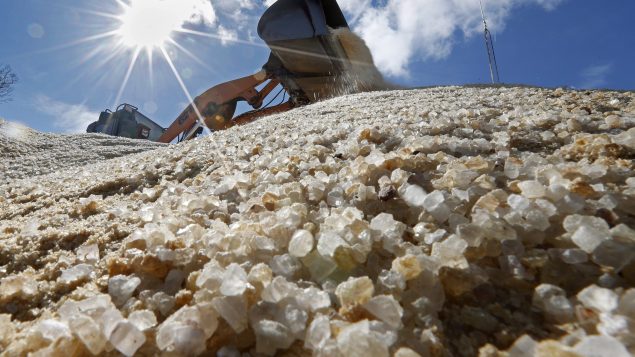 Road salt is toxic to the environment

The toxicity of road salt depends on the amount used, explains Hendriks.

The more you put it, the more toxic it becomes. So what we see are levels close to ocean levels in freshwater systems.Elizabeth Hendriks, WWF Canada’s vice-president of freshwater

According to the map, the levels recorded are between 1000 and 1200 mg/l in some places.

In comparison, “a healthy salt level for freshwater ecosystems like as mussels, fish and turtles is 120 mg/l”, says the environmental advocate.

Anything above this limit as a significant impact on biodiversity but also on communities and drinking water.

We are creating freshwater systems that are inhabitable for freshwater ecosystems or freshwater species. And then, also, we’re seeing impacts to our drinking water and, for large urban centres and even smaller urban centres, impact on infrastructure.Elizabeth Hendriks, WWF Canada’s vice-president of freshwater

For example, salt erosion affects infrastructure such as the Gardiner Expressway, a municipal highway along the shore of Lake Ontario in Toronto, or the major bridge in Montreal, the Champlain Bridge. The latter is in such poor conditions that the city has had to build another one to replace it, which will be officially inaugurated on June 24. 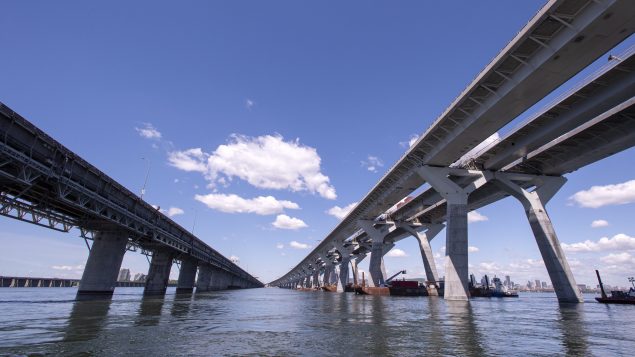 The new Samuel de Champlain Bridge is seen on the right next to the old bridge in Montreal on Monday. Paul Chiasson/THE CANADIAN PRESS)

The organisation already had concerns about drinking water in some areas as well.

In terms of wildlife, the presence of blue crabs in Cooksville Creek in Mississauga, Ontario, is a consequence of high chloride levels.

They don’t know how the blue crab, which is an ocean crab, found its way to Cooksville Creek but it was thriving in a freshwater river, well supposedly freshwater river.Elizabeth Hendriks, WWF Canada’s vice-president of freshwater

WWF has also seen the phenomenon affect other fish or turtle species, becoming an aggravating factor for species at risk.

Elizabeth Henriks talks about the risk to the environment (Photo: WWF-Canada)

One of the main results of this map is that the trend throughout the years (from 2007 to 2017) sees an increasing trend in summer-time data. We usually don’t expect to see such high salt levels in summer, making the results quite alarming explains Hendriks. 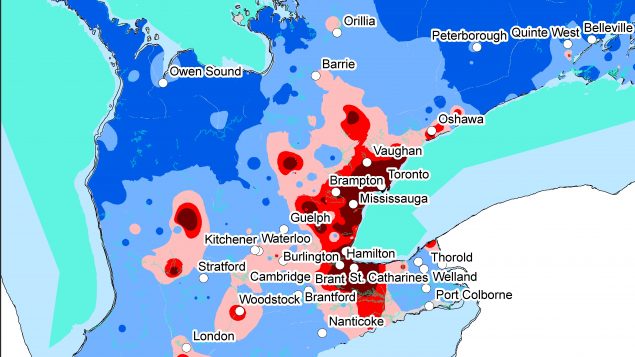 The map shows chloride levels in Southern Ontario. Data was collected during summer months (May-October) from 2007-2011. As the colour gets darker, the area is more likely to have unhealthy levels of chloride. High chloride levels pose a threat to freshwater wildlife and ecosystems. (WWF-Canada) 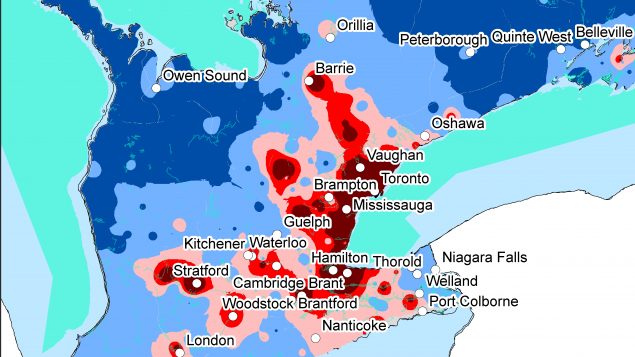 Usually, salt will run off in the Spring with rain and everything clearing but if we look at the data, it stays.

The salt doesn’t disappear because Winter is over. It accumulates over time.Elizabeth Hendriks, WWF Canada’s vice-president of freshwater

WWF Canada’s vice-president of freshwater recognises that they are alternatives to salt road but it depends on the scale of the community. Each one has to assess what’s most appropriate.

Obviously, salt is used, primarily, for safety and it’s easy and it’s cheap. They are alternatives, we just don’t understand the impact those alternatives might have if used at the scale we use all that.Elizabeth Hendriks, WWF Canada’s vice-president of freshwater

Some communities in Canada use beet juice or sand for example which have an effective use. Some Quebec towns mix beet juice with regular road salt and reduce the salt’s environmental impact but also save money, for example.

I suspect the solution is somewhere in a mix of different products.Elizabeth Hendriks, WWF Canada’s vice-president of freshwater

Other municipalities like Williams Lake in northern B.C. have been using Beet 55, a mixture of saline, sugar and beets.

Beet 55 is sprayed on roads before the snow arrives. It lowers the temperature required for rock salt to melt ice, and can last for two to five days—meaning it can last through multiple snowstorms.

These mixtures can be essential in some parts of the country because salt has its limits.

Salt isn’t effective after -10°C and so alternatives in colder parts of Canada have to be used.Elizabeth Hendriks, WWF Canada’s vice-president of freshwater
Elizabeth Hendriks talks about alternative solutions to road salt. (Photo: The Journal-Star, Dan Little/AP Photo)

New measures to change this trend

The World Wide Fund for Nature works in collaboration with the private sector explains Hendriks.

At national level, the government is aware of the problem and has put in place a “A Risk Management Strategy for Road Salts” to solve it.

A comprehensive five-year scientific assessment by Environment Canada determined that in sufficient concentrations, road salts pose a risk to plants, animals and the aquatic environment. A Risk Management Strategy for Road Salts was subsequently developed to outline measures that Environment Canada proposes in order to manage the risks associated with road salts.Government of Canada

The environmental advocate emphasized the fact that her organization is working towards solutions in partnership with many people who are at the table and willing to change things.

In a press release, the organization details its recommendations.